Tweet of the Day: The most secure Garda car in Ireland

Common sense, as well as Gardai warnings, would suggest you should always lock your vehicle. And the men in blue are practicing what they preach.

Judging by this photo taken by Irish Times writer Conor Pope today, the guards at Pearse Station are taking no chances, regardless of the type of car parked outside. Even something like a child’s toy car.

The hilarious photograpgh shows that when it comes to your vehicle, it is better to be safe than sorry. 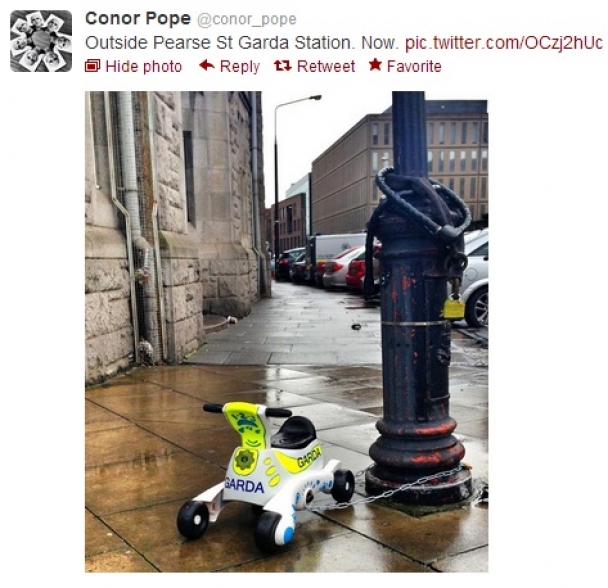 We're also struggling to figure out why the pole itself has a huge padlock around it. You would think in front of the Garda station would be a safe spot, but it looks like they are not leaving anything to chance.

We doubt this mode of transport would fare out well in a high speed chase, or for a rather portly member of the force, but it definitely looks more stylish than the Segways.

popular
Travis Barker rushed to hospital after tweeting "God save me"
Gardaí issue update on investigation into murder of Sophie Toscan du Plantier
R Kelly sentenced to 30 years in prison for sex trafficking and racketeering
The 100 best clubs in the world have been revealed
Amazon Prime Video has just quietly added 15 big movies to its library
Calls for €20 social welfare increase and minimum wage of €13 in new Budget
The 10 best TV shows of 2022 so far
You may also like
5 years ago
WATCH: This video showing 'hand-rolled ice cream' in Dublin is mesmerising
5 years ago
There's a new app that helps people find any food, drink or product they're looking for, locally
5 years ago
5 reasons why your business should 'pop-up' at one of Dublin's busiest stations
6 years ago
JOE BUSINESS: 3 great reasons you should pop-up in Dun Laoghaire this summer
6 years ago
This new app will help you keep track of the Luas strikes
6 years ago
TWEETS: Mixed reaction as Joan Burton steps down as leader of the Labour party
Next Page