One of the things that America does like nowhere else is the bench clearing sports brawl, and this one was a real doozy

In Alabama this weekend, a huge brawl between players, management and pretty much anyone who was standing around broke out after a high school football game.

Players and coaches from Cullman and Walker high schools took to the field after the game was over and Cullman had won 13-10, with the two managers becoming involved in a pretty ugly confrontation where some serious digs were thrown.

As you can tell from this picture (and the one used as the main image for the video), it was an intense fight, and one coach (the defensive coordinator for Cullman, Matt Hooper) walked away with a pretty beat up face. 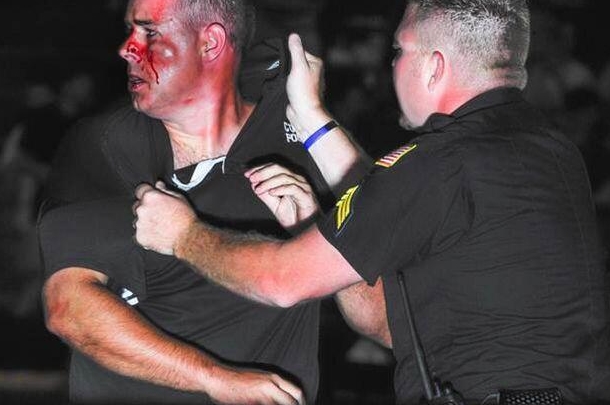 Cops and security were called in to separate the two groups of players, and while there has been no word yet as to repercussions, we imagine there will be a few bans handed down after this.

Hat-tip to @RivalsDallas for the pic and Bleacher Report

popular
Amazon Prime Video has just added 21 big movies to its library
One of the most underrated crime thrillers of recent years is among the movies on TV tonight
Shock as blues singer beats Adele, Beyonce and Taylor Swift to win Song of the Year Grammy
One of the best crime thrillers ever is among the movies on TV tonight
5 years ago, Hollywood took a massive gamble on a huge sequel... and lost big time
Ben Affleck's bored expression at the Grammys becomes a meme
QUIZ: JOE's Big News Of The Day Quiz #41
You may also like
9 months ago
COMPETITION: WIN a pair of tickets to an American Football game in the Aviva Stadium
3 years ago
Colin Kaepernick reaches settlement with the NFL over kneeling protest row
4 years ago
Maroon 5 finally recruit support acts for their Super Bowl half time show
4 years ago
This Irishman saves millions paid to injured players for the world's biggest teams
5 years ago
WWE CEO Vince McMahon has announced he is creating a new football league
5 years ago
Young boy walks into a shop wearing a Colin Kaepernick jersey and gets the surprise of his life
Next Page