Video: Match abandoned in Turkey as fans throw bricks and flares at players

Things got totally out of hand as Trabzonspor took on Fenerbahce last night, with fans erupting into violence

Football fans in Turkey are a passionate bunch, something which is certainly well known, but things really got out of hand last night as the match between Trabzonspor and Fenerbahce was abandoned due to crowd violence.

The first half lasted nearly an hour as there were several stoppages as a result of objects being thrown on to the pitch, including a door handle at one stage.

The game was eventually called off when goalkeeper Volkan Demirel had several flares thrown at him (and had the holes burned into his jersey to prove it afterwards) and players ran the risk of serious injury as a result of bricks being thrown down at them. 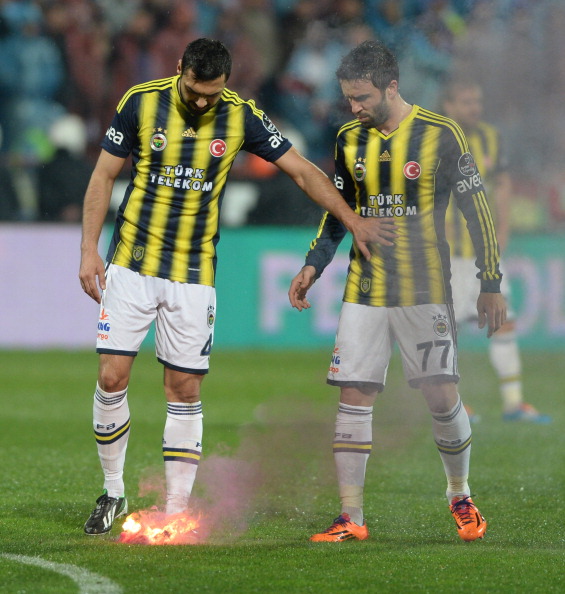 Afterwards the trouble continued, as fans stormed the pitch and Fenerbahce players had to be brought out of the ground in their usual bus surrounded by over 20 armoured vehicles, according to reports, as supporters continued to clash with riot police on the streets.

Despite there being less than a half played, it is believed that Fenerbahce, the visiting side, will be awarded the three points, as they had a 1-0 advantage at the time of the game being abandoned.

House of Rugby Ireland · Quinn Roux on finding a home in Ireland and Mike McCarthy brings the absolute HEAT!
popular
Three men arrested following search of "chop shop" in Meath
Joe Exotic fails to receive pardon from US president Donald Trump
Irish punters could turn €0.98 into hundreds of millions* with a bet on the Super Jackpot
The 50 most iconic songs of all time* have been revealed
Virtual parade to replace official St. Patrick’s Day parade this year
QUIZ: Can you name all the teams in the NBA from their locations?
QUIZ: Name all the countries of the EU that contain 2 vowels or less
You may also like
5 days ago
A documentary about Pelé is coming to Netflix next month
1 week ago
Mum's anger at state of £30 free school meals package in the UK
2 weeks ago
UK records highest daily total of new Covid-19 cases
3 weeks ago
Everton v Man City tonight postponed due to coronavirus outbreak
3 weeks ago
Paul Merson rants about how Leeds fans should be furious at 'Bielsa ball'
1 month ago
EA Sports respond to 'baseless' lawsuit over alleged scripting in FIFA 21
Next Page