Yes that headline might be a bit of a mouthful but watch the video and it will make sense. Or at least as much sense as the Harry Potter films themselves. Or, well, you know what we mean.

Diehard Harry Potter fans will have known, or at least should have, that it was Harry Potter’s 33rd birthday on Wednesday, July 31, which would come as a shock to those of us who thought he didn’t look out of place alongside the Dublin minors when he celebrated their All-Ireland victory with them last year.

Anyway, to celebrate the occasion on Wednesday night, Jimmy Fallon called upon Harry's best friend Ron Weasley to sing ‘Happy Birthday’ to him, only to find that Ron was as drunk as a lord and was in actual fact, not Ron Weasley at all, but Simon Pegg.

It might have only been a brief cameo but Pegg still provided plenty of laughs and posted the following tweet from his dressing room afterwards.

Alright fine, I am a ginge. pic.twitter.com/N7WrBU6KkS 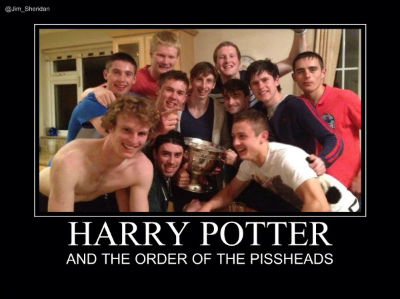 popular
RTÉ tries to solve Michael Collins murder in new documentary
Two men arrested after woman is stabbed in Kerry
QUIZ: Can you get top marks in this short but tricky Irish geography quiz?
4-year-old girl killed in Sligo caravan park named as Alice Dunleavy
Two long-thought-dead Marvel projects appear to be in the works
QUIZ: Can you score 12/15 in this difficult General Knowledge Quiz?
Family of Ashling Murphy share heartbreaking tribute at Fleadh Cheoil
You may also like
1 month ago
WATCH: J.K Rowling tricked by Russians impersonating Zelensky on Zoom call
4 months ago
There's a new Harry Potter game coming soon, and it looks unreal
7 months ago
The amended version of the Harry Potter Reunion is now available for Irish viewers
7 months ago
This is the week that all of the Harry Potter fans around the world have been waiting for
7 months ago
Mads Mikkelsen replaces Johnny Depp in the first Fantastic Beasts 3 trailer
8 months ago
All of the Harry Potter movies are available to stream at home right now
Next Page