Walters grabbed a second own goal with some poor defending after his first diving header own goal, turning his back on the cross and getting completely lost under the ball.

After that, he won a penalty of John Terry to grab some consolation for Stoke, but blasted it high over the bar. You can chalk this one down as a bad day at the office for Walters, who is normally superb for Pulis' side.

Chelsea looked extremely comfortable for long periods, and converted that into results on the scoreboard as well as some extremely nice football on the pitch.

Hazard added to the woes of Tony Pulis by scoring Chelsea's fourth in style, as it was quickly becoming a rout for the Blues.

Still, even though this was a complete spanking, it looks like there's no love from the Chelsea fans for Rafa. 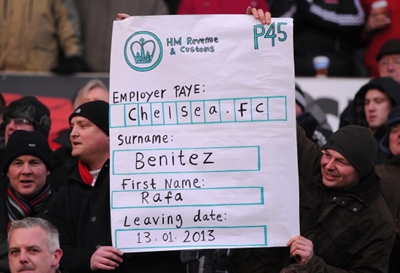 Shout out to referee's assistant Sian Massey, who had a great game and got a controversial penalty claim right early in the second half.

Captain leader legend John Terry also marked his return from injury with a substitute appearance in this game. His reception at the Brittania was not all that warm though, even though he swiftly gave away a penalty.

popular
Here's how to make €9-11 on Revolut in just a few minutes
Green Party representative calls for a temporary ban of stag and hen parties in Ireland
Pop Idol star Darius Campbell Danesh has died, aged 41
Off-duty Garda arrested in Tipperary on suspicion of drink driving
QUIZ: You won't be able to correctly guess the meaning of all these words
Woman dies and four others injured after crash in Mayo
Dublin Bus passenger assaulted in suspected homophobic attack
You may also like
2 years ago
"I’d rather have a couple of mates than a couple of medals" - Jason McAteer responds to Roy Keane comments
3 years ago
There was a huge reaction to Jonathan Walters' emotional interview on The Late Late Show
3 years ago
Jon Walters shares his colonoscopy experience in attempt to raise awareness of bowel cancer
3 years ago
Jon Walters issues statement on departure of Martin O'Neill
3 years ago
Jon Walters all but confirms the Stephen Ward Whatsapp story
5 years ago
WATCH: Jon Walters belter opens the scoring against Uruguay
Next Page