Was the Man United striker happy with Sky’s coverage of him yesterday? We think that’s a no…

While Cardiff’s late equaliser against Manchester United should have been the story of the game, instead, much of the focus was on Wayne Rooney after he appeared to kick out at Cardiff’s Jordan Mutch.

The England striker was booked for the clash but many observers, including Sky’s commentary team, reckoned he should have got the line. Commentator Martin Tyler referred to the incident with Mutch a number of times throughout the remainder of the game and studio analyst Graeme Souness, no stranger to a harsh tackle himself, was sure Rooney should have seen red.

So when Rooney got home and saw the coverage, he took to Twitter to have a pop back at the Sky team. 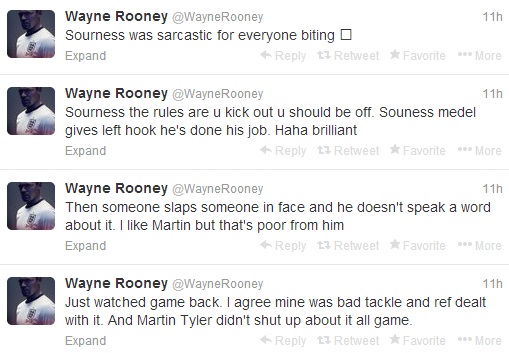 Reckon it might be a while before Wayne gives the Geoff Shreeves an interview.

popular
One of the best movies of the decade has just been added to Netflix
Cristiano Ronaldo 'agrees £173m-a-year deal' with Saudi club
The latest Star Wars episode is directly based on an IRA funeral
Country singer Jake Flint, 37, dies in his sleep just hours after his wedding
Katherine Ryan says famous TV star is a ‘predator’ and everyone in industry knows
20 years ago, one of the best sci-fi movies of the 21st century was a box-office bomb
Surprise frontrunner emerges as potential next James Bond as producers 'love him'
You may also like
3 months ago
Rebekah Vardy breaks down in tears in first TV interview since Wagatha Christie defeat
4 months ago
Rebekah Vardy loses 'Wagatha Christie' libel case against Coleen Rooney
3 years ago
Coleen Rooney accuses Rebekah Vardy of leaking stories to The Sun after elaborate plot to catch her out
3 years ago
Wayne Rooney's mugshot released after his arrest for 'public intoxication and swearing'
3 years ago
Wayne Rooney 'arrested on public intoxication and swearing charges' in Washington D.C.
4 years ago
WATCH: People are loving Wayne Rooney's magic moment in the MLS
Next Page