That's an awful lot of money into their coffers...

We all know that jumbo transfer fees are the norm in football, and even though the world hit a recession around 2008, spending in football continued to escalate. It really is a different ball game, no pun intended of course.

Anyway, the folks over at Opta pro have been crunching the numbers, and put together a table of the teams that have raked in the most money from selling players over the past five seasons, and there are a few entries on the list that might surprise you. 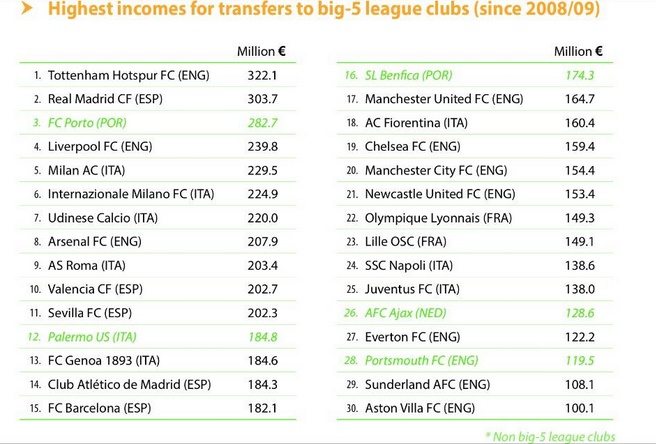 Spurs sit proudly atop the pile thanks to a few huge money transfers (Berbatov, Modric and Bale to name a few, not to mention our own Robbie Keane), but Udinese's model of investing heavily in South American talent seems to be working very well, and has given the Pozzo family the spare cash to buy up Watford and Granada while they're at it.

Surprisingly Madrid, who are big spenders themselves, are also high up the table, while Porto's strategy of finding brilliant players and selling them for a huge price is also going well too. Who'da thunk it?

House of Rugby Ireland · Quinn Roux on finding a home in Ireland and Mike McCarthy brings the absolute HEAT!
popular
The JOE Movie Quiz: Week 85
QUIZ: The JOE Music Quiz: Week 41
The JOE Movie Quiz: Week 86
A woman has died following a car accident in Dublin
Gardaí warn of scam targeting AIB customers
Drivers told to exercise 'extreme caution' due to "very icy conditions"
The JOE Friday Pub Quiz: Week 227
You may also like
1 week ago
A documentary about Pelé is coming to Netflix next month
1 week ago
Mum's anger at state of £30 free school meals package in the UK
3 weeks ago
UK records highest daily total of new Covid-19 cases
3 weeks ago
Everton v Man City tonight postponed due to coronavirus outbreak
3 weeks ago
Paul Merson rants about how Leeds fans should be furious at 'Bielsa ball'
1 month ago
EA Sports respond to 'baseless' lawsuit over alleged scripting in FIFA 21
Next Page