David McInerney sure knows how to pose with hurling’s biggest prize.

There were some great pictures from during the game yesterday and we expect to have loads more today as Clare bring Liam MacCarthy home for the first time in 16 years.

Already some crackers from the team hotel this morning have already arrived in from INPHO but this one, of Clare defender David McInerney redefining ‘chillaxin’ on the sofa on a Sunday morning with addition of one of Ireland’s most prized sporting trophies.

The 20-year-old looks like he was born to be in this picture. 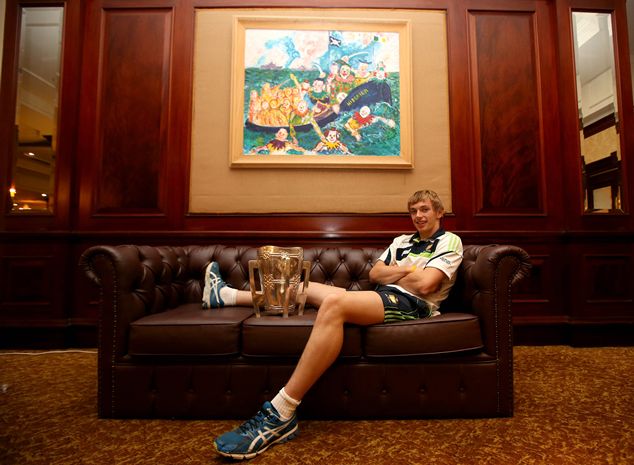 popular
Netflix has just added 23 very big movies to its library
The JOE Friday Pub Quiz: Week 308
The 50 most iconic songs of all time* have been revealed
Controversial influencer Andrew Tate banned from Instagram and Facebook
Two Irish people arrested in "smuggling event" near Miami
People think they've figured out the ranking of the viewers on your Instagram Stories
Pilots fly over destination airport at 37,000 feet because they were both sleeping
You may also like
1 month ago
Looking for a hotel room for the All-Ireland Final weekends? It won't come cheap...
1 month ago
Taoiseach condemns "disturbing" fight at Galway v Armagh game
2 months ago
The 2 Johnnies share unbelievable catfish ordeal affecting over 40 people
3 months ago
Limerick hurler arrested following alleged altercation with Tipperary player in Limerick pub
4 months ago
Woman in her 20s dies after accident during Camogie match
10 months ago
Wicklow GAA to investigate fight after Under 15 match on Saturday
Next Page