The overall winners of the Knorr Professional Ireland’s Great Roast 2019 competition have been announced.

Previously known as the Great Carvery of the Year competition, Ireland’s Great Roast is one of the most hotly contested culinary competitions in Ireland. 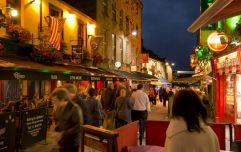 END_OF_DOCUMENT_TOKEN_TO_BE_REPLACED

Venues from right across the four corners of the island entered the competition with the best pub roast going to Griffin’s Bar in Clifden, Galway, while The Limerick Strand Hotel won the best hotel roast.

“Once again this year the standard of the food served was fantastic but the two winners were exceptional," Jim Reeves, Customer Director at Unilever Food Solutions

"It’s a huge credit to the venues’ management, chef and serve teams that they are acknowledged with this win," he added.

The winners of the competition for each province as well as the overall winners have been listed below.

popular
The 50 most iconic songs of all time* have been revealed
Making A Murderer: The explosive and NSFW telephone call that implicates a new killer
Hank Azaria feels he needs to apologise "to every single Indian" for playing Apu in The Simpsons
Dr Ronan Glynn says six more weeks of strict restrictions needed to prevent fourth wave
Dr Ronan Glynn says there will likely be no need for vaccine passports by June
Steven Avery's lawyer says nephew Bobby Dassey planted evidence in case
Taoiseach Micheál Martin says hotels across Ireland could reopen by June
You may also like
1 day ago
Despite massive impact on sector in 2020, beer remains Ireland's favourite alcoholic drink
3 weeks ago
LVA asks government how many people need to be vaccinated for pubs to reopen
2 months ago
QUIZ: Can you recognise each of these iconic Dublin pubs?
3 months ago
Wetherspoon's brand new €27.4 million pub and hotel in Dublin is now completed
4 months ago
Micheál Martin responds to claims that he is "protecting the pubs in Dublin"
4 months ago
Publicans say government “can’t hide behind NPHET” over decision to keep wet pubs closed
Next Page