'Baby Shark' hype is still real and showing no signs of slowing down as the song gets morphed into new forms and remixes (dear God let there be no more remixes).

One spin-off of the song is 'Baby Shark' Ab Workout, which isn't exactly new, having first received internet fame in 2018, but it looks like a hell of a workout that can be done in the safety of your own home.

The Baby Shark Ab Workout is something that was created for kids as a way to get them exercising. The problem is, it is certainly not easy. A sequence of floor based v-sit ab exercises takes the user through a series of eight moves without rest.

In an Athlean-X video, a fitness channel with almost nine million subscribers, trainer Jesse explains that after he lost a bet, he was condemned to doing the 'Baby Shark' Ab Workout for a whole month, and he said it really worked for him.

Skip ahead to around the two minute mark in the video below to see him run through the workout. 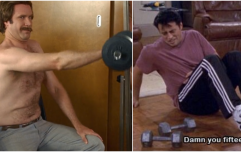 END_OF_DOCUMENT_TOKEN_TO_BE_REPLACED

Now, we're not saying if you do this for 30 days you're going to look like Jesse, he's a trainer with low body fat who had abs to begin with. But if there's room for a little bit of exercise in your life, this could help.

You could probably do it without the music once you've it done a couple of times, it may prevent you from going nuts, or worse, beginning to actually like the song.

Here’s the Baby Shark Ab Workout to try for yourself, or you know, not try...

popular
Met Éireann issues status yellow rainfall warning for nine counties
QUIZ: How well do you know these famous Ted Hastings quotes from Line of Duty?
Lark Voorhies is not too pleased about being snubbed from the Saved by the Bell reboot
Two Irish citizens have tested positive for the coronavirus
QUIZ: How well do you know the Matrix series?
BBC will show an 'immensely powerful' documentary about The Troubles tonight
History to be required Junior Cycle subject from September
You may also like
2 weeks ago
QUIZ: Can you name all these bones in the human body?
2 weeks ago
COMPETITION: Win tickets to Thrive Festival 2020 for yourself and three mates
4 weeks ago
New year, new you? Thrive Festival 2020 is the answer to all of your fitness needs
1 month ago
Workout at home this Christmas with these five easy exercises
2 months ago
If you can only do one exercise at the gym, make it the ring chin-up
3 months ago
COMPETITION: Win €250 worth of brand-new training gear
Next Page