Hiking along the spectacular Maamturks in Connemara

If you're looking to get close to nature, look no further than The Maamturks.

Oscar Wilde once called Connemara a "savage beauty," and it's doubtful that anyone will ever come up with a better description. There certainly aren't many other places in this country that make you feel so completely cut off from the rest of the world.

The place is absolutely huge as well, so the best way to take it all in is by hitting the open road. If you want to test out a new car while you're at it, MINI Ireland is currently offering a 48-hour test drive of their latest range.

John Burke is a man who has done everything from start his own business to climb Mount Everest. If he says The Maamturks are a challenge, we're inclined to believe him...

"The key to this day is stamina, preparation and great navigation skills"

Connemara is a place that has captured the heart of many a visitor to this spectacular landscape, some say the most spectacular on earth, but I still favour my home county’s Burren for that title! The palette of colours, still waters, barren lands, the feeling of being nestled away in such a remote part of the planet means you feel worlds apart from the neighbouring hustle and bustle of Galway city.  I’ve been lucky to join in with some Galway friends on a few big days out here.  For some reason all but one day of our climb was in glorious weather, lucky timing I guess.

One particular challenge here is to cover the Maamturks on foot, the little sister of the Twelve Bens at the other side of the Inagh valley. The route stretches for approximately 25km, with a vast number of summits along the way. We counted 16 but think we ended up doing a couple of them multiple times due to navigational disagreements!  The key to this day is stamina, preparation and great navigation skills. Without all of those it’s one to leave behind.

It was an early start, leaving my home in Ennis at about 4.30am for a start time I had hoped for of 6am. It ended up being closer to 7am by the time we kicked off, so we had to be very conscious of the timings ahead. There were a few exit points we had picked, and some of the group chose that option on the day.  I was in great company, time was flying, and a quick stop on the top of every second or third summit ensured we got the photos to remember the day by. We soaked up the views all around us.  It’s the closest thing I’ve experienced to being immersed in the wilderness of the Scottish Highlands. It feels like a world away from civilisation and mindfulness at its best with my phone well tucked away. 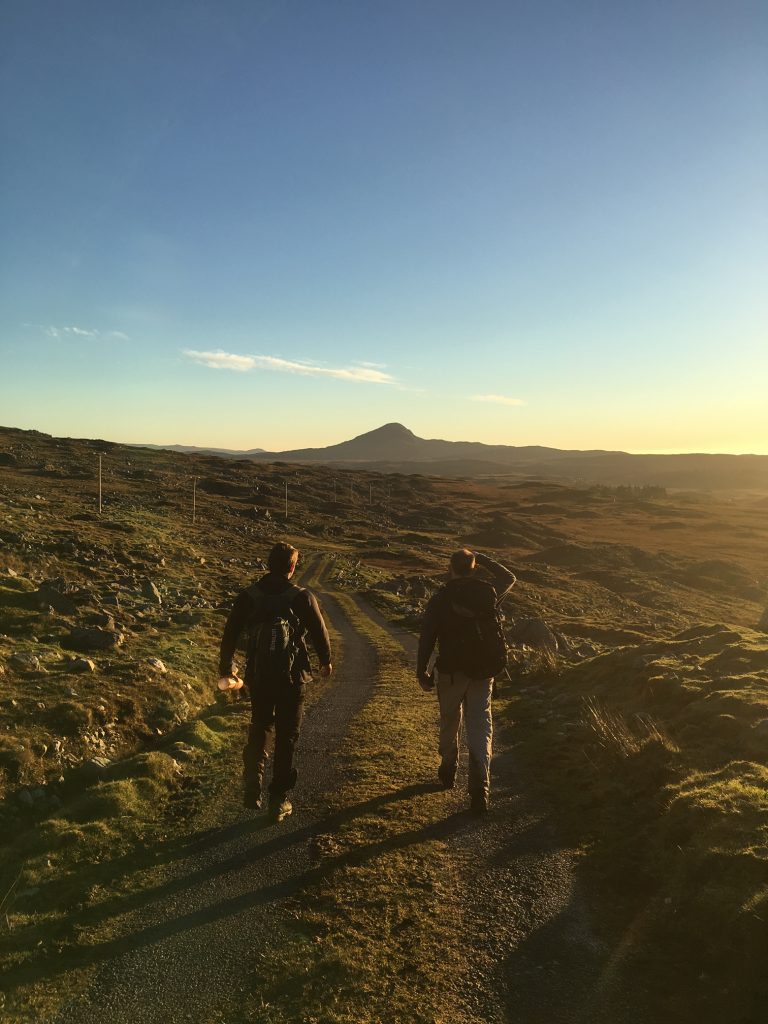 Around the middle of the day we came across a placed named ‘Mamean’ which is a site of pilgrimage dedicated to St. Patrick. It was surreal to stop there in the depths of the countryside and appreciate the work done by dedicated believers in preparing this alter and shrine, where I understand mass can take place on occasions. I hope they have an easier way to get to it than across the mountain. It’s a low point of the trail so access must be along a trail from a nearby road.  We took a long break here as being a low point we knew we were facing another uphill immediately after eating.

My lasting memory of this day was the final stretch as the lights of Leenane, famed for The Quiet Man movie, were shining in the distance. We were quiet men ourselves at this stage, well quieted by the route behind us!  I think we were about 14 hours into the day, moving fast, but doubling up on some peaks. As we approached the village the sounds of people enjoying a nice evening in the local inns certainly built up our thirst. We could see the sympathy in their faces as they looked at us approaching like bedraggled Martians landing into their town.  A phone call to a taxi, a cup of tea while waiting and it was back to our cars at the starting point close to Maam Cross.

Make this a summer day, book an experienced guide, be very well prepared with equipment, skills, and fitness, and this is a day you won’t forget.  NUIG Mountaineering Club organise the Maamturks challenge each year which is worth considering also. Shorter days I’ve enjoyed in Connemara included the Diamond Hill Trail, the Glencoaghan Horseshoe, both challenging and exhilarating also.

There’s a MINI for every lifestyle. So to prove it, we are giving you 48 hours in a MINI to see just how versatile the range can be. Are you up for the challenge? Discover the range at www.mini.ie or book now right here.


popular
Met Éireann issues status yellow rainfall warning for nine counties
QUIZ: How many of these Recess characters can you name?
Two Irish citizens have tested positive for the coronavirus
The 50 most iconic songs of all time* have been revealed
Hozier soundtracks the excellent new trailer for Netflix’s latest original series, Marco Polo
QUIZ: How well do you know these famous Ted Hastings quotes from Line of Duty?
QUIZ: How well do you know the Matrix series?
You may also like
2 weeks ago
QUIZ: Where in the body are these bones located?
2 weeks ago
First-time buyers of Dublin! Fancy watching Crazy, Stupid, Love with us?
2 weeks ago
COMPETITION: Win tickets to Thrive Festival 2020 for yourself and three mates
3 weeks ago
COMPETITION: Win a 12-month membership in a gym of your choice
3 weeks ago
This week's US Powerball jackpot is a monumental €337 million, so get entering!
4 weeks ago
COMPETITION: Win two nights B&B in the Knightsbrook Hotel for two people
Next Page