Leinster Rugby ‘Scrum Dine with Me’ in association with Optimum Nutrition: Rob Kearney

Will Rob’s dessert live up to the excellent starter and main course that went before it? We’ll find out in part three of a new JOE.ie series, 'Scrum Dine with me'.

Followers of Roy Keane will quickly recognise that there’s something not quite right with the above quote, but it was one of only a few minor mistakes made by Rob Kearney in the kitchen. 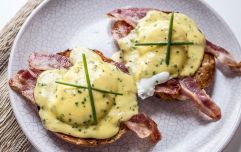 END_OF_DOCUMENT_TOKEN_TO_BE_REPLACED

JOE.ie teamed up with Leinster Rugby and Optimum Nutrition for a new series we've dubbed 'Scrum Dine with Me' and in episode three, Rob cooked up his patented protein pancakes for his esteemed guests, Devin Toner and Kevin McLaughlin.

Devin and Kevin had set the bar quite high in previous episodes but apart from a flip attempt gone wrong, Rob came through with flying colours.

Between getting Roy Keane quotes wrong, speaking about the tradition of the pancake recipe in the Kearney family and even referencing the Boring Kearney account that has become ridiculously popular on Twitter, Rob was certainly enjoying himself and we’d like to think it showed in his dish.

Check out how he got in the video above.

To see how Devin Toner fared in first episode of ‘Scrum Dine with Me,’ click here and to see Kevin McLaughlin’s efforts in episode two, click here.


The Architects Of Business || JOE · "It doesn't get bigger than this for me" - Irish scientist wins EY Entrepreneur of the Year 2020
popular
Video: So what exactly did John Terry say to Anton Ferdinand?
The JOE Movie Quiz: Week 80
QUIZ: Can you guess these European countries from their outlines?
QUIZ: How well do you know Elf?
Donald Trump paid $3 million for recount that uncovered more Biden votes
Gardaí search suspected shebeen in Kerry
The JOE Music Quiz: Week 35
You may also like
1 year ago
WATCH: These dairy-free overnight oats are as healthy as they are easy to make
1 year ago
Here's how to make the perfect leftover turkey sandwich
3 years ago
This French potato dish is the ultimate comfort food
3 years ago
Try these simple but amazing dishes to reinvent your BBQ menu
3 years ago
3 amazing BBQ sauce recipes that you can easily make from scratch
5 years ago
Three simple and healthy Tuna recipes which are sure to satisfy your taste buds
Next Page