We all know fast-walkers and slow-walkers.

A study conducted by professors from many universities - including King's College London and Duke University in the US - has found a link between a slower walking pace throughout life, and overall health.

A study of 1,000 people in Dunedin, New Zealand, which began in 1970 and followed the participants through to middle age, has found that those who clocked in at a slow pace of 1.25 metres per second had smaller brain volume, more cortical thinning, smaller cortical areas, and more white matter lesions. 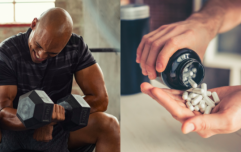 Popular gym supplement found to be ineffective at building muscle

END_OF_DOCUMENT_TOKEN_TO_BE_REPLACED

These are factors that would be more likely to show up in an older brain.

Other scary outcomes for slow walkers included worse cardiorespiratory health, immune health, and gum and teeth health of the slow-walking participants than those who were clocking in at 1.75 metres per second or faster.

The participants were all 45 years old at the time that the follow-up data was gathered.

It is important to consider that some of the participants may walk slower due to poor health, which could also explain poor results on the various bio-markers that were tested.

The results have been described as "really striking" by the team who carried out the research. The study has since appeared on the JAMA Network Open.

"The thing that's really striking is that this is in 45-year-old people, not the geriatric patients who are usually assessed with such measures," said lead researcher Line J.H. Rasmussen, a post-doctoral researcher in the Duke University department of psychology & neuroscience.

The Big Reviewski || JOE · TBR Spotlight: Loki - Episode Three - 'Lamentis'
popular
The 50 most iconic songs of all time* have been revealed
PICS: The man with the biggest penis in the world has one unbelievable problem with it
The Ultimate Robert De Niro Quiz
People think they've figured out the ranking of the viewers on your Instagram Stories
Aldi launches new garden collection including massive waterpark, slides and 14ft pools
Here's the average age people lose their virginity around the world
A Murder in West Cork review: New doc series fixes one of Netflix's biggest problems
You may also like
3 months ago
Get moving this April and raise funds for a good cause with Focus Ireland's virtual marathon
4 months ago
Exercise instructor does aerobics class while military coup takes place behind her
6 months ago
WATCH: Fitbit shows what 2020 would sound like if it was translated into a score of music
6 months ago
COMPETITION: Win €745 worth of top quality gym equipment from McSport to celebrate their Black Friday sale
7 months ago
Gini Wijnaldum shares his favourite gym exercises for building abs of steel
9 months ago
Irish people working from home are sitting down for nearly three hours longer every day
Next Page