The 10 most anticipated games confirmed for release in 2021

There is A LOT to be excited about when it comes to gaming throughout the rest of this year.

While it does seem like the release schedule for BIG games is a little barren right now - and, as more and more games seem to be pushed back to a 2022 release, including the Hogwarts Legacy and Lord Of The Rings: Gollum - there actually are some big titles due for release before 2021.

Now, obviously, as is the case with everything in these uncertain times, there is a chance that even these confirmed-for-2021 games could get pushed back (or, happily, brought forward!).

For now, however, these are the 10 games due for release this year that we're most excited about.

END_OF_DOCUMENT_TOKEN_TO_BE_REPLACED

The sixth game in the main series (and the first since 2018's Monster Hunter: World) will see you returning to trapping and/or slaying huge beasts across an open world. Some classic monsters will be making a return, but the developers have promised some brand new creations to chase down, and to be chased down by. 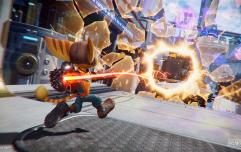 Ratchet & Clank: Rift Apart will be the first game to properly test the PS5's capabilities

END_OF_DOCUMENT_TOKEN_TO_BE_REPLACED

Following up on the brilliantly scary Resident Evil 7, the next entry in the hit horror franchise is introducing witches AND werewolves. We've played the early access demo section of the game, and jumped in fight a number of times and it is fair to say that the scares are as effective as ever.

The remastered editions of the original Mass Effect Trilogy, as well as practically all of the DLC content that was made available for those three games. You'll get to control Commander Shepard within a galaxy of visual enhancements, technical improvements and gameplay adjustments from when we last played these games.

Or if you've never dived into the world of Mass Effect before, there is no better time to do so.

Described as an inverted Cluedo, you'll control an assassin who wakes up on a beach on an island, hosting a party that is taking place in the middle of a time anomaly. At the end of the night, every night, it reverses in time to the beginning of the party, and it starts all over again.

So you'll need to remember all of the intricacies of how the night plays out in order to successfully assassinate your targets. Sounds bonkers. We can't wait.

Billed as both a direct sequel to 2013's Into The Nexus as well as a standalone adventure for newbies to the series to enjoy, Rift Apart will see Ratchet and Clank travelling across the universe (and multiple parallel universes) in order to stop a malfunctioning device from bringing an end to all organic life in the universe.

Set on the fictional island of Yara (pretty much a stand-in for Cuba), you'll control a rebel fighter attempting to bring down the dictator (played by Breaking Bad/The Mandalorian actor Giancarlo Esposito) and his iron-fist regime.

Originally due for release in February, it has since been pushed back to Q2/Q3 due to the impact of Covid-19.

After the 2018 reboot successfully transplanted Kratos from Greek mythology into the world of Norse gods, it is fair to say that the upcoming sequel, which is said to be about the event that kicks off the end of days and the death of the gods, is massively anticipated.

Beyond the year being announced in the teaser trailer, nothing else is known of the new game. Even the title above, Ragnarok, is currently unconfirmed.

Picking up some time after the apparent death of Batman in Arkham Knight, you'll control some of his cohorts - Nightwing, Bat Girl, Robin, and Red Hood - to take down the Court Of Owls, the new crime group that has effectively taken over Gotham City. No set release date yet, but considering the wintry setting, we're guessing closer to Christmas 2021.

Master Chief is reportedly taking on a much more central role after being kinda sidelined in 2015's Guardians, as he investigates the return of the Banished merc group. Originally planned to release at the launch of the Series X, it was subsequently delayed to late 2021.

After 2017's Zero Dawn proved to be one of the best open-world games around (the inclusion of giant robot dinosaurs always makes a game immediately better), anticipation is high for the sequel, which will see Aloy continue her journey to find the source of a mysterious plague that is killing everything it touches.

All clips via Nintendo, PlayStation, and Xbox.

The Big Reviewski || JOE · TBR Spotlight: Loki - Episode Three - 'Lamentis'
popular
The Ultimate Robert De Niro Quiz
Aldi launches new garden collection including massive waterpark, slides and 14ft pools
The 50 most iconic songs of all time* have been revealed
It’s official, your pint is one of the most expensive in Europe
PICS: The man with the biggest penis in the world has one unbelievable problem with it
Two thirds of Irish people believe modern men lack basic DIY skills compared to previous generations
A Murder in West Cork review: New doc series fixes one of Netflix's biggest problems
You may also like
1 month ago
The 'gamer lean' is real and it genuinely helps you win at FIFA
1 month ago
New study shows Ireland among the world's top video game cheaters
2 months ago
10 great PlayStation games you can get right now for less than €20
2 months ago
COMPETITION: Win a brand new state-of-the-art gaming console with Jack Daniel's®
2 months ago
All PS4 and PS5 owners have a free game to download right now
2 months ago
WATCH: The new Resident Evil Village trailer gives us vampires, werewolves and more
Next Page