Not a bad little earner while on summer holidays.

Meet Joshua Juliano - the Irish teenager who will shortly be competing for a $3 million prize at the Fortnite World Cup.

17-year-old Josh is better known to the gaming world as lolb0om, which is his online username, and he will be among 100 gamers playing in the Arthur Ashe Stadium in New York. 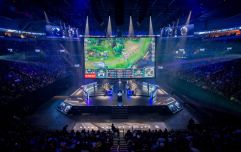 "When I try explain my job... people look at me like I've got three heads!"

END_OF_DOCUMENT_TOKEN_TO_BE_REPLACED

He will be competing at the Fortnite World Cup on Sunday evening, where prize pool is a total of $30 million.

Having gained qualification earlier this year, he has guaranteed himself a minimum of $50,000, which will increase with every round he advances past.

The prize for first place is $3 million.

Yep. So all that time you spent playing video games as a kid was not a waste, you actually didn't play enough...

JOE met with Josh earlier this week to chat with him ahead of the highlight of the e-gaming calendar. Take a look:

You can keep up to date with the goings on of the Fortnite World Cup on their official YouTube page here.

With a bit of luck, Josh could return to Dublin ahead of his Leaving Cert year with a few million in the bank, and the title of the best Fortnite player in the world.

We're rooting for you!

popular
Disney+ has just added 10 big movies to its library
QUIZ: You'll do well to get 100% in this General Knowledge Quiz
QUIZ: How well do you really know Irish weather?
The JOE Movie Quiz: Week 167
The 50 most iconic songs of all time* have been revealed
25 years ago, Sylvester Stallone delivered his best performance in a hard-hitting crime drama
Why Bran Stark is the true villain of Game of Thrones
You may also like
2 years ago
Fortnite maker sues Apple and Google after game is removed from app stores
2 years ago
It looks like two of the biggest games in the world are about to have a crossover
3 years ago
Fortnite players threaten to ditch the game after new update makes it too hard
3 years ago
There is a $100 million prize pool for Fortnite players in 2019
3 years ago
A potential Fortnite-beater was released without warning this week
3 years ago
Facebook usage plummets among young Irish people
Next Page