WATCH: People are rediscovering the screaming video game and it is properly hilarious

Just don't play it on the bus.

2019 has already proven to be a landmark year with great video games, thanks to the likes of the remastered Resident Evil 2, Devil May Cry 5, Apex Legends, Kingdom Hearts III, Metro Exodus, and The Division 2.

But in the last few days, a lot of people have only begun to discover a mobile game that is already starting to take social media by storm. 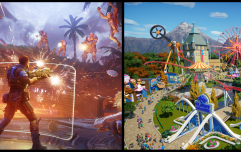 END_OF_DOCUMENT_TOKEN_TO_BE_REPLACED

Scream Hero Go: Eighth Note Yasuhati doesn't have the catchiest title, but it does have an incredible gameplay hook - your little character on screen is propelled forward by the amount of noise you make into your phone's microphone.

Little whispers will jolt him forward incrementally, loud screams will send him soaring through the sky, and you have to jump between platforms, avoid little spiky creatures, and make it to the flag and move on to the next level.

Well, yes, except you'll often forget that talking also counts as noise, so when you stick the landing and declare "Well done!" to yourself, you'll likely send your little guy jumping off the edge.

It also leads to a lot of hilarious screams, shouts, and moans, as players begin to lose all concept of their surroundings as they get lost in the game.

Here are two of our favourites of people rediscovering the game in the last few days.

First up is Marie, who probably gave her neighbours some genuine concerns:

And here is Ryan, who oscillates between forgetting he can't talk, and making what we can only describe as overtly sexual noises to get his character across the finish line:

okay this is the funniest game I have ever played in my life pic.twitter.com/7l61IaHojH

popular
The JOE Friday Pub Quiz: Week 279
Public urged to be wary of sophisticated Revolut scam in operation in Ireland
Gardaí release CCTV footage of last known whereabouts of Bernadette Connolly
John Travolta's Irish accent has to be heard to be believed
New Netflix series looks like a must-watch for fans of Drive to Survive
Here's the line-up for this week's episode of The Late Late Show
The full list of all the new shows and movies coming to Netflix in February
You may also like
3 days ago
China gives Fight Club a new ending, manages to completely change the plot of the movie
2 months ago
Who tweeted it: Simu Liu or Rahul Kohli?
2 months ago
Cow escapes field, heads to resort and gets stuck on water slide
3 months ago
Drunk man reported missing ends up joining search party to find himself
5 months ago
WATCH: The interview between Niall Horan and Lizzo is an absolute flirt-fest
5 months ago
Why improv comedy is the exact night out we all need right now
Next Page