This has jumped to the top of our WANT RIGHT NOW list.

We've known about this long-awaited sequel for a while now, and have kept a close eye on it, and today the latest trailer for Streets of Rage 4 has dropped some more info which makes it even more of a must-play for us than ever before.

On top of returning characters Axel Stone, Blaze Fielding and Adam Hunter, Streets Of Rage will be bringing along two new characters, Cherry Hunter (daughter of Adam) and the newly announced Floyd Iraia, who appears to be have a huge cybernetic piston for an arm. 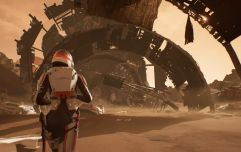 END_OF_DOCUMENT_TOKEN_TO_BE_REPLACED

However, the big news is that developer Dotemu has revealed more information about the actual game itself and, more importantly, the multi-player aspects.

Fans of the original trilogy on the Sega Mega Drive - 1991, 1992 and 1994, respectively - will remember that one of the best parts of the gameplay was beating up the baddies alongside another player. Streets of Rage 4 will feature online two-player mode, but it will also feature local four-player mode!

If you've got the controllers, then FOUR of you can take on Big Boss and his not-as-big henchmen.

popular
Amazon Prime Video has just added 21 big movies to its library
The 50 most iconic songs of all time* have been revealed
One of the best crime thrillers ever is among the movies on TV tonight
Here is a list of every Bank Holiday in Ireland in 2023
Nicola Bulley's phone found by the river 'could be a decoy', diving expert suggests
Mark Hamill on the one piece of dialogue he got removed from the original Star Wars
Teenager killed in shark attack after swimming with dolphins in Australia
You may also like
1 week ago
New PlayStation 5 ad may have just teased top secret Uncharted 5
1 week ago
The Last Of Us Part III and Uncharted 5 updates given by games creator
1 week ago
Dead Space 2023 improves upon a modern horror classic
1 week ago
Forspoken breaks the golden rule of gaming... and not in a good way
2 weeks ago
PlayStation reveal the 10 most-downloaded free-to-play games on PS4 and PS5
2 weeks ago
7 more movies and shows based on huge games arriving in 2023
Next Page