WATCH: The trailer for the latest Pro Evolution Soccer game is here

Last week, EA set the cat amongst the pigeons when their trailer for FIFA 20 revealed that the game would be bringing back its beloved indoor mode as well as incorporating elements of the old FIFA Street games.

Needless to say, this piled the pressure on FIFA's old rival, Pro Evolution Soccer, which is made by Japanese video game company Konami. 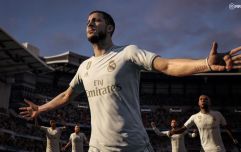 END_OF_DOCUMENT_TOKEN_TO_BE_REPLACED

PES dropped their trailer today, heavily leaning on Lionel Messi, who will feature on the game's cover once more.

The trailer also features plenty of game engine footage, and hints at additions to the Master League format — where legends of the game such as Diego Maradona and the late Johan Cruyff have been added as managers. Not only that, but Ronaldinho will also be available as part of the PES Legends edition which can only be bought online.

Another Barcelona legend, Andres Iniesta, has been added as both real-life gameplay consultant and in-game MyClub pre-order bonus.

The new name - eFootball PES 2020 - seems to reference the growing culture of eSports.

The new Pro Evolution Soccer game is slated for release on September 10, 2019. Will it be able to compete with FIFA 20?

popular
WhatsApp to punish users unless they agree to new privacy changes in coming weeks
The JOE Movie Quiz: Week 101
Here are the restrictions being eased today as Ireland continues reopening
RSA confirm online theory tests to come into effect later this month
QUIZ: Can you identify the EU country of origin from these €1 coins?
QUIZ: Can you identify which of these countries have the colour blue in their flag?
QUIZ: Can you list the 32 counties of Ireland in order of population size from largest to smallest?
You may also like
1 year ago
Here's how you can vote for EA SPORTS™ FIFA Team of the Year
1 year ago
An extremely useful guide to being a massive dickhead on FIFA 20
1 year ago
Irish rapper JyellowL to feature on FIFA 20 soundtrack
1 year ago
The top 20 player ratings for FIFA 20 have been revealed
1 year ago
Great news, FIFA Street makes a glorious return in FIFA 20
1 year ago
Changes to the new and improved career mode in FIFA 20 will make it the best yet
Next Page