Alright people of Galway, we've got a proposition for you. We're looking to find people skilled enough to conquer both the digital and physical worlds of football, and we've teamed up with Coca-Cola to send them on the trip of a lifetime.

If you can get a high score on our online 5-a-side shootout game, we'll invite you to one of four real tournaments, and the winning team will be sent to the grand final. That final will be held in Dublin, and six lucky ducks will be sent on a Premier League trip they'll never forget.

To make Galway your chosen venue for the initial tournament, simply select it when setting up your account. The Galway tournament will be played on Saturday, 17 August in Astrobay in Renmore. 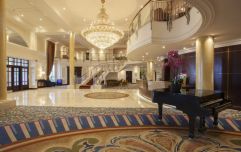 END_OF_DOCUMENT_TOKEN_TO_BE_REPLACED


popular
Gardaí name the three children that were found dead in a Dublin home
Met Éireann state that three days of snow, hail, and sleet is coming for parts of Ireland
Viewers raise over €300,000 after Munster's Billy Holland and wife Lanlih's emotional Late Late Show appearance
The JOE Friday Pub Quiz: Week 175
The shortlist for the best breakfasts in Ireland has been revealed
QUIZ: We give you the movie title, you tell us the dog breed in it
How to manage a panic attack, according to the experts
You may also like
2 days ago
This week's US Powerball jackpot is a monumental €337 million, so get entering!
3 days ago
New year, new you? Thrive Festival 2020 is the answer to all of your fitness needs
1 week ago
QUIZ: How well do you know Will Smith's movie career?
1 week ago
COMPETITION: Win a VIP table for four to see Sharon Shannon live in Dublin
1 week ago
COMPETITION: Win free tickets to Titanic Belfast for yourself and a mate
2 weeks ago
QUIZ: How well do you know the first two Bad Boys movies?
Next Page