It's the most wonderful time of the year.

As we are CERTAIN you have already heard, the Christmas lights were switched on in Dublin on Tuesday night.

To many, that's a sign that it is officially Christmas time. To others, it's always the first day of December, while to more, it's not until they get their Christmas holidays.

END_OF_DOCUMENT_TOKEN_TO_BE_REPLACED

But to loads of people, the festive season only truly begins when Christmas FM starts playing on the radio and these people now have just two weeks to wait until the station is back. 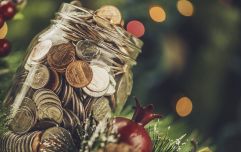 END_OF_DOCUMENT_TOKEN_TO_BE_REPLACED

This year, the festive radio station will be raising money for Barretstown, a camp for children with cancer and other serious illnesses.

They will be aiming to raise over €250,000, which will go directly towards Barretstown’s mission of rebuilding the lives of seriously ill children and their families, through life-changing Therapeutic Recreation Programmes in a safe, fun and supported environment.

All the while, they'll be playing everyone's favourite Christmas songs.

It really is the best time of the year.

This will be Christmas FM's 12th year on the air, having raised roughly €2 million for charity since the project started in 2008.

popular
Netflix has just added an incredibly tense 97-minute thriller
Prime Video has just added 25 very big movies to its library
The Ultimate "That Actor From That Thing" Quiz
Stunning Mayo beach named the best place to swim in Ireland and the UK
The 50 most iconic songs of all time* have been revealed
WATCH: House of Hammer details the alleged crimes of award-winning actor Armie Hammer
Tarantino's sequel to Django Unchained is now officially dead
You may also like
1 month ago
30 years ago today, a huge Christmas movie was released in the depths of summer
2 months ago
A Late Late Toy Show musical is coming to Dublin
7 months ago
The JOE Entertainment Quiz Of The Year
7 months ago
Here are all the big movies on TV on St Stephen's Day
7 months ago
Here are all the big movies on TV on Christmas Day
7 months ago
QUIZ: Can you name every single bad guy in the original Die Hard?
Next Page