We've all done it.

That is, been so engrossed in something, while simultaneously swiping left on Tinder, that you make the ultimate in fatal errors and swipe left on someone who may have potentially been The One. 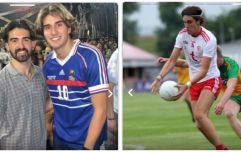 END_OF_DOCUMENT_TOKEN_TO_BE_REPLACED

Oh well – you'll just have to put it down as a mistake and learn from it.

However, that isn't the way everyone sees it.

No no, Hayden Moll from Missouri State University wasn't taking this sitting down. Instead, Hayden took it upon himself to find the one who (accidentally) got away.

Moll knew a few details of his rejected love, including that her name was Claudia. So, instead of scouring social media in his local Missouri, he actually emailed every Claudia in the university with specific details about her Tinder profile.

And his search was not fruitless, as he actually found the one he so heartily desired.

Her full name is Claudia Alley and she shared his long and amusing email on Twitter.

THIS GUY LITERALLY EMAILED EVERY CLAUDIA AT MISSOURI STATE TO FIND ME ON TINDER pic.twitter.com/x8tQuYmj8Q

The tweet wrote: "THIS GUY LITERALLY EMAILED EVERY CLAUDIA AT MISSOURI STATE TO FIND ME ON TINDER"

As you can guess, it went viral pretty quickly.

People responded with mixtures of shock, disbelief and total hilarity.

Donut let this one get away

If I did this I’d get blocked and a restraining order.

Did she email left or right!?

Everyone was keen to know whether Claudia emailed back 'left' or 'right', but that's still anyone's guess.

JOE has reached out to Ms Alley for confirmation, but had not heard anything back yet.

However, someone has managed to find Hayden's Twitter profile during the madness. And, in our opinion, he deserves a date for his bio alone.

The Big Reviewski || JOE · The Big Reviewski with Ray Liotta, Goodfellas facts & Tom Hanks making us cry
popular
One of the best twist endings of all time is among the movies on TV tonight
Netflix has just added arguably the very worst movie of the last decade
Treasury Secretary warns US government will run out of money by October 18
Investigation launched after woman in her teens hospitalised following crash with on-duty Garda car
The new Britney Spears documentary on Netflix is provoking a very bad reaction
Ireland ranked best in the world for Covid resilience, according to a new study
Dublin Commuter Coalition calls on Eamon Ryan to answer questions on DART+ delays
You may also like
2 months ago
Irish Tinder users to get "free super like" for sharing vaccine badges as HSE partners with dating apps
6 months ago
Blackmailers are targeting Irish people on dating apps
2 years ago
Four Irish entries in Cosmopolitan's top 30 most swiped Tinder accounts in Ireland and the UK
2 years ago
Tinder set to change the dating game for festival season with Festival Mode
2 years ago
Tinder introduce Height Verification Badge to stop people lying about how tall they are
2 years ago
Here's exactly what makes Irish people swipe right on Tinder
Next Page