Yesterday was National Pizza Day - we are pretty sure that is not a religiously festival or an official government bank holiday. It was probably just dreamt up by marketing people to sell more pizza. But whatever, if it is an excuse to eat more pizza, why not?

KFC and Pizza Hut have teamed up to 'celebrate' the 'holiday' with the Gravy Supreme. And it looks like quite something.

It consists of a Cheesy Bites Pizza Hut pizza, with a KFC gravy base topped with a popcorn chicken, cheese and sweetcorn.

It’s #NationalPizzaDay and alongside @PizzaHutDeliver we’ve been concocting what can only be classified as a work of art.

The Gravy Supreme. Do we even need to ask if you’d buy it..? 🍕🍗 pic.twitter.com/eVLzzz4MkC

Before you get too excited though, the Gravy Supreme isn't actually available for order. It is just a concept idea that the brands' chefs are experimenting with. 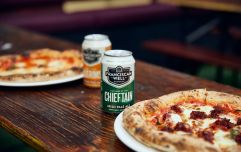 END_OF_DOCUMENT_TOKEN_TO_BE_REPLACED

They've asked if people would want to buy it, presumably with the view to maybe put it on the menu at some point in the future.

Alternatively, you could just get a pizza from Pizza Hut, then stop off at KFC on the way home to buy some popcorn chicken and gravy and put it on there yourself.

A KFC UK & Ireland spokesperson said: “Dreams really do come true. Pairing our signature gravy and Popcorn Chicken with Pizza Hut’s famous base and toppings is a match made in heaven. Believe us when we say it’s a thing of absolute beauty.”

Both KFC and Pizza Hut are both owned by Fortune 500 corporation Yum! Brands, so the collab isn't that out of the blue. Combination Pizza Hut/ KFC/Taco Bell locations are not uncommon in the USA.

popular
Harvard study reveals how many times men should ejaculate each month to stay healthy
Colin Farrell shouldn't win the Oscar this year
Netflix has just added one of the best sci-fi movies of recent years
Parents left in shock after gorillas start mating in front of kids at zoo
Conor Mcgregor hit by car ‘at full speed’ while cycling
The 50 most iconic songs of all time* have been revealed
Forspoken breaks the golden rule of gaming... and not in a good way
You may also like
5 days ago
Irish pizzeria given perfect score by top food reviewer
2 months ago
Heinz Beanz pizzas set to make a return
6 months ago
Four Star Pizza to open 45 new stores and create 900 new jobs in Ireland
1 year ago
Apache Pizza launches biggest ever recruitment drive with 500 jobs in 180 stores
2 years ago
Two Irish spots named among the best pizzerias in Europe
2 years ago
Ranking every pizza topping from worst to best
Next Page