PIC: This man quit his job with a greeting card like an absolute boss

When you see people quit in movies, there's always a bit of drama, whether that's by screaming bloody murder while they're dragged from the building or by stealing a chair from the office as payment for their loyal service.

END_OF_DOCUMENT_TOKEN_TO_BE_REPLACED

But that's not real life, in reality, you're probably going to need a reference or recommendation in the future so it's best not to rock the boat before you leave. Also, Ireland is a small place and word gets around quickly.

But if you're looking for a funny way to dramatically leave your place of work without ruffling too many feathers, then this fella on Imgur could be a man to emulate.

Instead of handing in a conventional written notice, Alex produced some creativity to make the announcement... in the form of a condolence card. 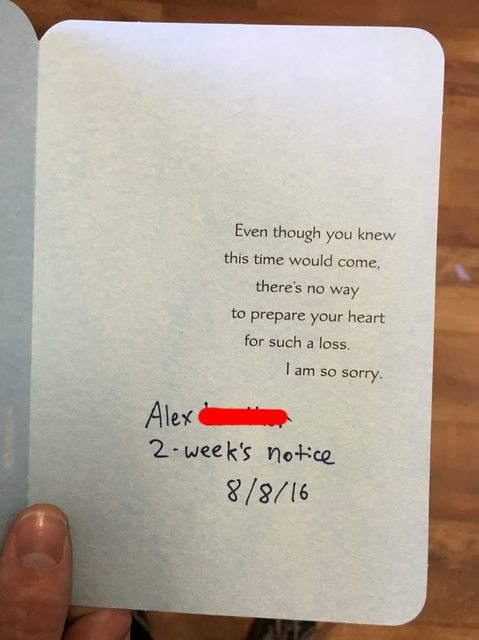 We'd have paid good money to have seen the reaction of his boss when he received this letter...

popular
QUIZ: How will you fare in our ‘Not as it seems’ quiz?
Can you get top marks in Week 57 of JOE's 19 in 90 quickfire quiz
Principal of Carlow school denies claims female students were asked not to wear tight leggings to school
Eir CEO says opening a call centre in Sligo was a "mistake" as staff weren't sufficiently skilled
QUIZ: How well do you remember the final season of Game of Thrones?
Video: So what exactly did John Terry say to Anton Ferdinand?
QUIZ: Can you tell which of these items can be recycled?
You may also like
1 year ago
25 of the funniest tweets you might have missed in October
1 year ago
WATCH: RTÉ raised their game with their Halloween reporting on Thursday
1 year ago
Personality Test: What percent clown are you?
1 year ago
WATCH: The trailer for Season 14 of It's Always Sunny features melons, poison and laser tag
1 year ago
Here are the ten funniest jokes from this year's Edinburgh Fringe Festival
1 year ago
WATCH: Liam Gallagher weighs in on the Noel Gallagher VS Lewis Capaldi beef
Next Page