PICS: This stag party in Louth had a Paddy "Pintman" Losty theme and their t-shirts were epic

The legend lives on...

Continuing the trend of possibly the best Irish meme of 2017, Paddy "Pintman" Losty is still having a daily influence on the folk of Ireland.

For those of you unaware, the phenomenon is inspired by the great Paddy Losty, a picture of whom was brought to the Irish public’s attention in 2015 by Publin.ie, who found him in a book titled ‘Dublin pub life and lore’ by Kevin C Kearns.

END_OF_DOCUMENT_TOKEN_TO_BE_REPLACED

Paddy, so goes the description in the book, was one of Dublin’s great pintmen, who were known to put away 30 or more pints in a day, and his status as a viral sensation really kicked off this year when he became the basis for several memes involving  a man drinking 45 pints in about two hours, with only a packet of ‘crips’ and ‘maybe a packet of peanuts’ for sustenance.

One of JOE's loyal readers got in contact with us to show off the t-shirts that he and the rest of the his stag party wore during their recent pre-wedding celebrations in Carlingford.

Mark Reilly, the groomsman Shane McHale, and the rest of the mostly Mayo lads wandered around the Louth town, and as Mark puts it:

"Everyone we met were either laughing their heads off or wondering what it was about but they all said they had never seen a stag t-shirt like it before."

We have to agree, they are pretty awesome. 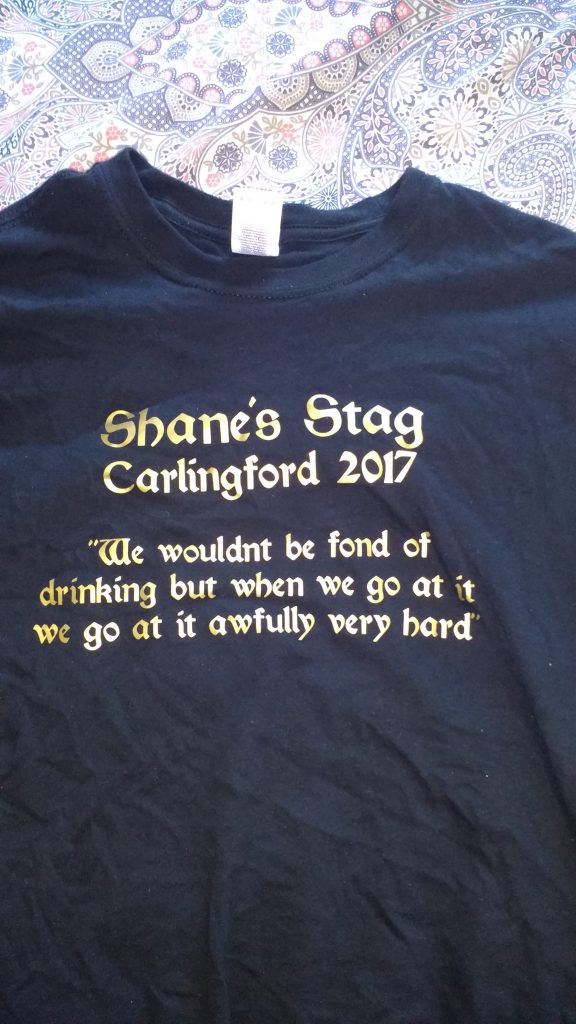 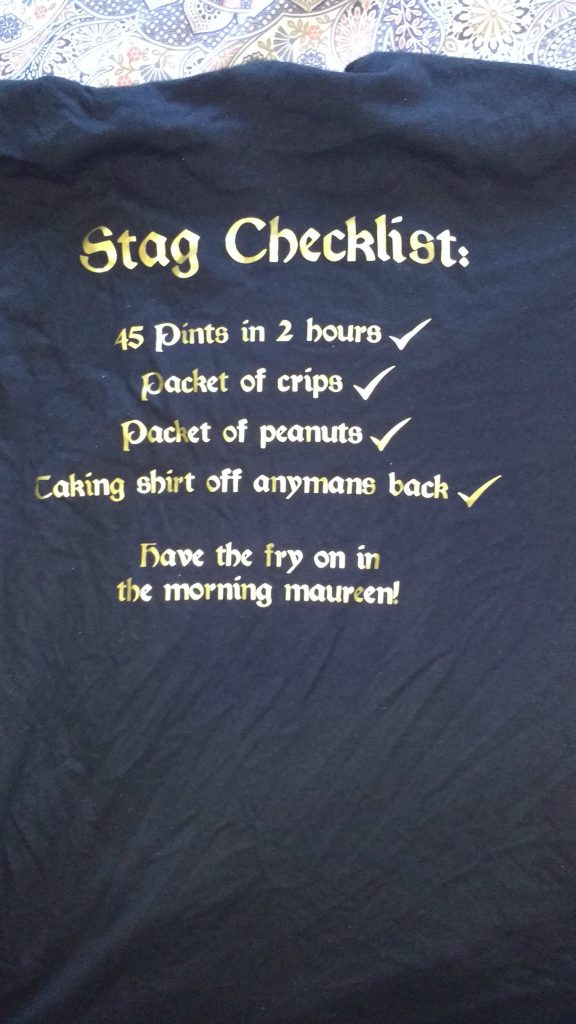 But we think you'll agree, we need to know how many bags of crips and packets of peanuts the lads got through before the stag weekend came to an end.

popular
Clint Eastwood's final western is among the movies on TV tonight
The Toy Show DJ brothers have been offered their very first gig
The 50 most iconic songs of all time* have been revealed
The JOE Friday Pub Quiz: Week 271
PCR tests to be required for all international arrivals to the UK
The full list of all the new shows and movies coming to Netflix in December
QUIZ: Let's get cracking with this General Knowledge Quiz
You may also like
1 week ago
Ireland is the 11th most affordable country to buy a home in, says new study
2 weeks ago
Young fan Ronaldo gave his jersey to reveals what he said to her
1 month ago
"It’s obvious these guidelines were issued by Government without any meaningful consultation with the hospitality sector."
1 month ago
CONFIRMED: Nightclubs to open at 100% capacity, 11.30pm curfew has been removed
1 month ago
Warning issued after vans follow couriers to steal packages ahead of Christmas
1 month ago
Gardaí investigating after man robs hotel at knife point in Kerry
Next Page