Video: Check out this ingenious way to put out a fire when there's no water around for miles

Pop quiz hotshot. There's a truck on fire in the middle of a forest road with no water around for miles. What do you do? WHAT DO YOU DO?

Sorry for shouting. We just really want to put this fire out. 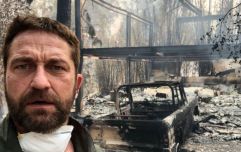 END_OF_DOCUMENT_TOKEN_TO_BE_REPLACED

One local Fire Captain used his noggin when recently faced with that exact dangerous dilemma and so called in an aerial fire drop which successfully took care of the flaming fire in question.

Watch as the pilot expertly douses the damaged truck with his load and, here at JOE HQ, we're just just hoping that everyone had cleared the area before the soaking, otherwise we might be looking at bizarre headlines along the lines of "Man Drowns In Tragic Fire Accident" which just makes no sense whatsoever.

House of Rugby Ireland · Munster's nail-biting win, European games in doubt and Darren Cave interview
popular
QUIZ: Name all the counties of Ireland that contain 3 vowels or more
Recall of Pedigree dog food over safety concerns
The JOE Friday Pub Quiz: Week 226
QUIZ: Can you correctly identify these European country flags?
QUIZ: Can you pass your driving test and guess the meaning of all these road signs?
QUIZ: Can you guess the drink from its can?
The JOE Movie Quiz: Week 84
You may also like
7 months ago
Status Red fire warning issued due to extreme forest fire risk over Bank Holiday weekend
1 year ago
Firefighters dealing with large blaze at Derry nightclub
1 year ago
Warning issued as Dublin house fire caused by electric scooter
1 year ago
Offices evacuated near Dublin city centre as "derelict building set alight" on Clanbrassil Street
1 year ago
25 bodies found following boat fire in California
1 year ago
Local fire brigade share images from aftermath of car park blaze in Cork
Next Page