Not something you expect to see on the Great Wall every day.

It’s always great to see Irish dancing showcased to a wider audience in various parts of the globe and settings don’t come much more spectacular than the Great Wall of China.

A select group of dancers and musicians were in China in the last week as part of a week of music and dance supported by Culture Ireland and to round off the trip, they staged an impromptu performance on what looked like a glorious day on one of the world’s best known landmarks. 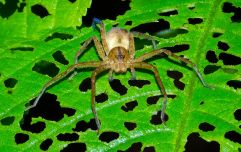 END_OF_DOCUMENT_TOKEN_TO_BE_REPLACED

Onlookers watched on in wonder and filmed footage on their mobile phones as dancers Jack Quinn, Aideen O'Connell, Eimear O'Connell, and Jordan McCormick strutted their stuff to music provided by Eddie Kavanagh on the bodhrán and Éadaoin Ní Mhaicín on the fiddle.

It's safe to say the audience were impressed and why wouldn’t they be? Fantastic stuff.

popular
The "eighth best movie ever made" is among the movies on TV tonight
Mia Khalifa claims seaside town is better than Miami
Jennifer Lawrence sparks controversy by saying she was the first woman to lead an action movie
Met Éireann updates weather warning for entire country as temperatures set to fall to -6
One of the best films of all time is among the movies on TV tonight
The 50 most iconic songs of all time* have been revealed
QUIZ: JOE’s Big News Of The Day Quiz #27
You may also like
8 months ago
Rescuers find no survivors after China Eastern Airlines plane carrying 132 crashes
8 months ago
Chinese plane with 132 people onboard crashes into mountain
9 months ago
Richard O'Halloran says he felt "totally" abandoned by Irish Government when stuck in China
10 months ago
WATCH: Reporter dragged away by Chinese official during live report at the Olympics
10 months ago
China gives Fight Club a new ending, manages to completely change the plot of the movie
1 year ago
China confirms first global case of human bird flu strain
Next Page