Commuters facing lengthy tailbacks after collisions on the M50 and M7

Commuters using the M50 and M7 are facing lengthy tailbacks after a number of collisions close to peak traffic times on Friday evening.

Dublin Fire Brigade attended collisions at Junction 6 Blanchardstown and a collision in the middle and right lanes southbound at the M1 interchange on Friday afternoon.

All lanes were reopened shortly before 5pm after an oil spill was cleared between Junction 5 Finglas and Junction 4 Ballymun, but heavy traffic was reported on the M50 at a time when many commuters would be making their way home from work.

Oil spill N'bound between J5 and J4 has been cleared and all lanes have reopened. #m50safety 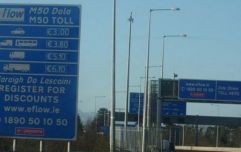 END_OF_DOCUMENT_TOKEN_TO_BE_REPLACED

On what has been an incident-heavy day on Irish roads, there were also collisions reported on the M7 in Kildare, at the Christy Ring Bridge in Cork, on the N13 Letterkenny to Ballybofey Road in Donegal and on the M6 in Roscommon between Ballinasloe and Athlone.

Keep an eye on AA Roadwatch on Twitter for further traffic updates.

The Big Reviewski || JOE · TBR Spotlight: Loki - Episode Two - 'The Variant'
popular
Garda union hits out at "absolute confusion" over outdoor drinking and dining
Gardaí will use "discretion" over outdoor drinking at pubs and restaurants
The Queen appealing for volunteers to weed the garden of her Sandringham Estate
Man in his 60s killed following assault at home
QUIZ: Can you get full marks in this potentially very frustrating general knowledge quiz?
The JOE Friday Pub Quiz: Week 248
QUIZ: Can you name all these European countries from a list of cities?
You may also like
2 days ago
Appeal made for witnesses after cyclist hit by car in Dublin
3 days ago
Three men arrested after reportedly attacking staff of premises on South William Street
4 days ago
Two teenagers die in separate incidents in Dublin and Waterford
5 days ago
Search continues for missing Dublin man in Wyoming mountains
6 days ago
Gardaí investigating after homophobic graffiti near Dublin's PantiBar on Sunday
1 week ago
James Geoghegan said planners of concrete social spaces "should be shot"
Next Page