We pity the poor van owner who came upon this sight this morning.

Devilment is very much in the air around Christmas time; a few drinks and a few reunions with old friends tends to bring out the mischief over the festive season.

Mischief was most certainly on the minds of a JOE reader who will remain anonymous and a couple of his friends in Birr in Offaly in the early hours of this morning as they decided to have a bit of fun at the expense of an unsuspecting van driver on their way home from the pub.

Having come across a stray van and a few loose cones, the schemers in question decided to surround the van, leaving the driver with a bit of work to do before getting it back on the road. 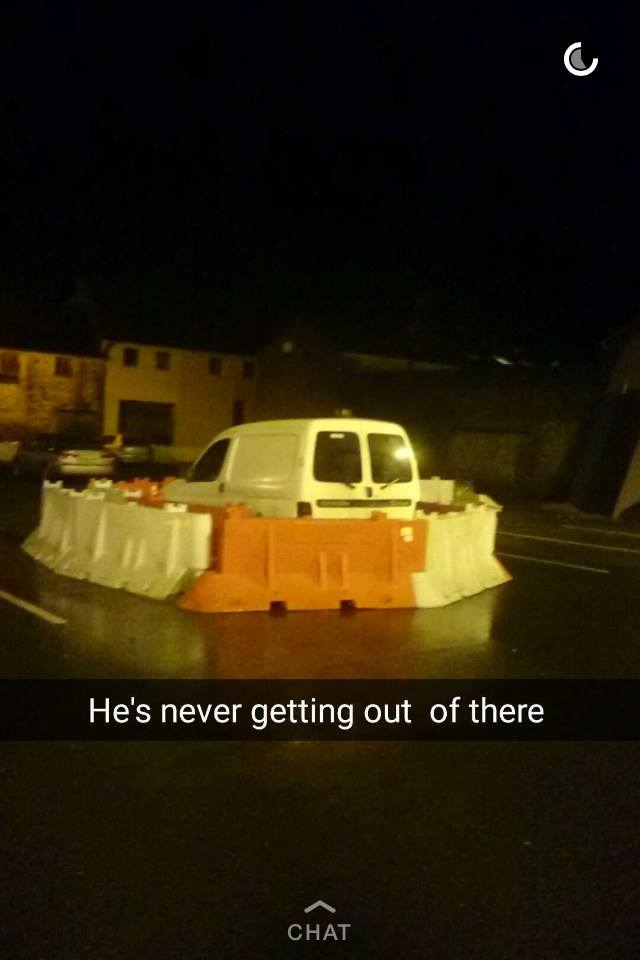 A little silly, perhaps, but we’d wager that a few locals in Birr got a good laugh out of it this morning all the same.


popular
Met Éireann says there's a risk of snow for parts of Ireland this weekend
QUIZ: Can you guess the pixellated movie posters?
QUIZ: Can you name all these European countries just from their vowels?
Teenager arrested in relation to death of Cameron Blair at a house in Cork
Aldi to recruit 550 new staff and implement living wage rate for employees
Here are Ireland’s favourite takeaways, as per the National Takeaway Awards
You may also like
1 week ago
Trampolines and fallen trees affecting traffic all over Ireland due to Storm Brendan
1 month ago
Irish car insurance premiums up 42% despite claims falling by 40% over last 10 years
1 month ago
Over 300 drivers arrested on suspicion of intoxicated driving in Ireland in the last two weeks
1 month ago
New system of penalty points and speeding fines to be considered by Cabinet
2 months ago
Motorists face €120 fine and three penalty points for dangerous overtaking of a cyclist
2 months ago
"Thousands of Irish drivers" are paying up to €1,000 too much for car insurance
Next Page