Happy birthday to a genuine cult-classic.

Drunken, depressed and desolate after discovering a young boy that was brutally molested and murdered, Ed Harris' grizzled Detective Remy Bressant taps into a primal rage that we all acknowledge, but rarely embrace.

With the stench of alcohol on his breath and the burden of knowing the evil that men do on his shoulders, he recounts a story to Patrick Kenzie (Casey Affleck) about how he gleefully planted evidence on a child abuser. 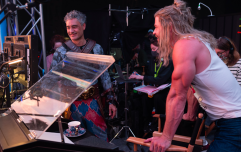 END_OF_DOCUMENT_TOKEN_TO_BE_REPLACED

Do you agree with this? Are you outraged? Is this right?

Well, to quote Detective Bressant: "Fucking A! You gotta take a side. You molest a child, you beat a child, you're not on my side. If you see me coming, you better run, because I am gonna lay you the fuck down! Easy."

Right now, as much as the audience will never admit it, a part of our soul and morality is nodding along in agreement. After all, we're all flawed humans and even though we know that this behaviour is against the law, there's a small part of you that's fully supportive of Bressant's animalistic decision.

Fast forward to the events of 20 minutes later. We're very curious to know where your moral compass is pointed at.

Welcome to the murky-morality of Gone Baby Gone and as Ben Affleck's superb drama turns 10, we're paying tribute to an excellent film that absolutely nailed one universal truth about how the world works, life isn't black and white, it's grey.

END_OF_DOCUMENT_TOKEN_TO_BE_REPLACED

If you haven't seen the film yet then you're in for an absolute treat because since being released, it continues to get better with age. As for that ending, we'll talk about it later because as Patrick said: "When your job is to find people who are missing, it helps to know where they started."

Gone Baby Gone follows the explosive case of a missing four-year-old girl named Amanda McCready. Despite the best efforts of the police, Amanda's aunt and uncle need someone that knows the area and the people that live in it - saints and sinners, angels and devils, police and criminals - but what happens when they're all one and the same?

END_OF_DOCUMENT_TOKEN_TO_BE_REPLACED

After consulting with his girlfriend Angie (Michelle Monaghan), Private Investigator Patrick Kenzie decides to take on the case because to paraphrase one line from the film: "Half the guys he knows are degenerates. The other half? Cops."

As things develop, we learn that inside this investigation lie secrets and a labyrinthine maze of class and corruption, evil and innocence. Ultimately, all things lead up to one man's extraordinary choice in a world where right and wrong have become blurred.

In strictly filmmaking terms, Gone Baby Gone is a triumph because not only did it mark Ben Affleck's directorial debut - he also co-wrote the screenplay with Aaron Stockard based on the novel by Denis Lehane - but the supporting cast is absolutely wonderful.

Michelle Monaghan, Morgan Freeman, Ed Harris, Amy Ryan, Michael Kenneth Williams and Titus Welliver are all excellent, but watching the film, you can't help but feel like you're fully immersed in the dangerous and dreary neighbourhood of Dorchester, Boston.

Every character feels memorable, fully formed and integral to the plot. In fact, you might not be surprised to learn that those are real local Boston actors, and members of the local community, in all the backgrounds. Ben Affleck made a deliberate choice not to cast professional extras for authenticity. A side note on Amy Ryan's brilliant performance, she looked and sounded so convincing as the drug-addicted and dishevelled mother that a security guard mistook her for a fan on the first day of location filming and wouldn't let her on the set.

The film's moral core is personified by Patrick's opening words that "I always believed it was the things you don't choose that makes you who you are. Your city, your neighbourhood, your family," but Gone Baby Gone revels in questioning the important decisions that ultimately decide your fate.

Words are loud, actions are louder - this belief is proven by that stunning ending. Ben Affleck's film understands that real drama lies in the consequences of decisions.

Now, what about the ending? Obvious spoiler alert warning.

Ok, so who was right?

Do you agree with the logic of Morgan Freeman's character, the retired police captain that kidnapped Amanda to fill the void of his own heartbreak and suffering? There's no denying that Amanda's mother, Helene, is an unsuitable parent. She uses drugs, ignores her child's welfare, steals money from a drug dealer and only cares about herself.

Hell, she didn't even know the name of her daughter's favourite doll - it's Annabelle, not Mirabelle.

As Jack Doyle (Freeman) convincingly said: "Deep inside you (Patrick), you know it doesn't matter what the rules say. When the lights go out, and you ask yourself "is she better off here or better off there", you know the answer. And you always will. You... you could do a right thing here. A good thing. Men live their whole lives without getting this chance. You walk away from it, you may not regret it when you get home. You may not regret it for a year, but when you get to where I am, I promise you, you will. I'll be dead, you'll be old. But she... she'll be dragging around a couple of tattered, damaged children of her own, and you'll be the one who has to tell them you're sorry."

On the other side of things, there's Patrick's logic that despite Helene's obvious flaws, she's still Amanda's mother and what the retired police captain did is a crime. It's wrong. Plain and simple, but as we now know, it's not really simple at all.

"If it does, I'll tell them I'm sorry and I'll live with it. But what's never gonna happen and what I'm not gonna do is have to apologise to a grown woman who comes to me and says: 'I was kidnapped when I was a little girl, and my aunt hired you to find me. And you did, you found me with some strange family. But you broke your promise and you left me there. Why? Why didn't you bring me home? Because all the snacks and the outfits and the family trips don't matter. They stole me. It wasn't my family and you knew about it and you knew better and you did nothing.' And maybe that grown woman will forgive me, but I'll never forgive myself," Patrick says.

Ultimately, Amanda returns to her mother, Jack Doyle goes to prison, Helene continues to be a terrible mother and Patrick's girlfriend is so disgusted by his decision that she leaves him.

See, Patrick did the right thing and it only caused him misery and heartbreak. How 'right' does he feel at the end of the film? Can he live with the decision that he has just made?

In such a cruel world, how do you know what's the right thing to do?

Well, as Patrick said: "When I was young, I asked my priest how you could get to heaven and still protect yourself from all the evil in the world. He told me what God said to His children. "You are sheep among wolves. Be wise as serpents, yet innocent as doves."

Ultimately, who do you think was right?  Film fans are still conflicted and that's why Gone Baby Gone is a genuine cult-classic.

Check out Gone Baby Gone on Netflix. Fucking A!

Just watched Gone Baby Gone and the ending had me conflicted over what decision I would have made.

The ending to this film always gets me and I still can't decide for myself who was right in the end. — watching Gone Baby Gone

@cinemasins Finally watched Gone Baby Gone with my dad, we argued for twenty minutes over the ending. Excellent movie!

@TDLockett12 the wife and I got in a argument over the ending of Gone Baby Gone. If you watch it you have to let me know what you think

Anybody watched Gone baby gone ? Need to discuss the moral dilemma in the ending. This is gonna distract me now 😞

The ending to Gone Baby Gone was heartbreaking

Also I think the ending in gone baby gone is so contradicting, morally you know what's right but logically you know it will end up wrong