10 years later, people still talk about this trailer. So why aren't more movies doing this?

There is a lot to be said for keeping your cards close to your chest.

What is the primary complaint people have about trailers for movies? They give away everything.

Back in the summer of 2007, audiences sat down for the first Transformers movie, and in front of it ran this trailer:

END_OF_DOCUMENT_TOKEN_TO_BE_REPLACED

No official title. No immediately recognisable big name actors or actresses. Not even a good grip on what the plot is about. Just that date. 18 January 2008.

Ten years later we can look back on Cloverfield, and the promotional campaign that led up to that movie's release, and see it for the piece of advertising genius that it was. But at the time, people had no idea what to expect.

It was pre-Planet Of The Apes or Batman for director Matt Reeves, and writer Drew Goddard had not yet moved on to blockbuster fare like World War Z or The Martian.

The only real recognisable name was J.J. Abrams, who was riding high from Lost at the time, but even then he had only directed one movie - the very underappreciated Mission: Impossible III - so this was still pre-Star Trek, pre-Star Wars, and for this movie, he was only in the producer's chair. 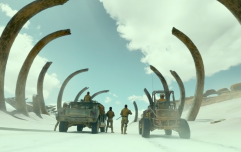 END_OF_DOCUMENT_TOKEN_TO_BE_REPLACED

Off the back of that trailer, and given that no other information had been released, movie fans rushed to fill the vacuum with speculation. This was a new found-footage Godzilla movie. This was a modern day Lovecraft adaptation. This would be the live-action Voltron movie. This was a spin-off from Lost. This was the American remake of the hit South Korean monster movie The Host.

It would be another four months before another trailer would eventually be released, along with the title of the movie, just two months before the movie was due to hit cinemas.

We got glimpses of a destroyed Statue Of Liberty, the Brooklyn Bridge being demolished, abandoned parts of Manhattan, mass scenes of mayhem and explosive shoot-outs. How did they manage to make such a massive project and keep it undercover for so long?

END_OF_DOCUMENT_TOKEN_TO_BE_REPLACED

Because the movie only cost $25 million to produce.

And the gambit paid off, because it would go on to make over $170 million at the box office.

However, for whatever reason, practically no other movie promotional campaigns have attempted something similar. Instead, time and time again we're greeted with epic length trailers that give away all of the money shots.

It would be the guts of a decade before it happened again, when we caught our first look at 10 Cloverfield Lane, a movie nobody had any idea was coming out, and the trailer arrived just two months before the movie did.

Once again, the gambit paid off, as the even smaller budget ($15 million) despite a much more recognisable set of actors, led to great profits ($110 million worldwide) at the box office.

And now, here we are, with a third Cloverfield movie on the horizon, but no trailer or official title in sight.

We had recently said that the movie was out in less than 6 weeks, but it has since been pushed back to 20 April, and with another set of recognisable names, including Elizabeth Debicki (Guardians Of The Galaxy 2), Daniel Bruhl (Inglorious Basterds), Chris O'Dowd (Moone Boy), Gugu Mbatha-Raw (Beauty & The Beast), David Oyelowo (Selma), Ziyi Zhang (Crouching Tiger Hidden Dragon), involved in a plot that early rumours say involves a team of astronauts with a particle accelerator who seemingly make the entire Earth vanish.

How that ties into the Cloverfield universe so far, what the movie is called, or what will be in the trailer (if there even is one??) is yet to be seen.

What we do know is that when movies and mystery work together this well, why don't more people in Hollywood follow Cloverfield's example and keep us just a little bit more in the dark?

The Big Reviewski || JOE · TBR Spotlight: Loki - Episode Three - 'Lamentis'
popular
The Ultimate Robert De Niro Quiz
Aldi launches new garden collection including massive waterpark, slides and 14ft pools
The 50 most iconic songs of all time* have been revealed
It’s official, your pint is one of the most expensive in Europe
Two thirds of Irish people believe modern men lack basic DIY skills compared to previous generations
PICS: The man with the biggest penis in the world has one unbelievable problem with it
A Murder in West Cork review: New doc series fixes one of Netflix's biggest problems
You may also like
1 week ago
Vue cinemas announce reopening dates from later this month
2 weeks ago
A Quiet Place Part II review: You NEED to see this in the cinema
2 weeks ago
The identity behind that secret baddie in Hobbs & Shaw
2 weeks ago
Those Who Wish Me Dead review: The kind of '90s action movie they just don't make anymore
2 weeks ago
The Conjuring 3 review: Just as scary, but twice as silly
3 weeks ago
A Quiet Place Part II sets biggest box office record since the pandemic began
Next Page