A scene-by-scene breakdown of the Godzilla vs. Kong trailer

In which we argue that Godzilla vs. Kong should have no dialogue in the final movie whatsoever.

If you haven't watched it yet, here it is. I'm going to watch it again right now.

END_OF_DOCUMENT_TOKEN_TO_BE_REPLACED

The sequel to the 2014 and 2019 Godzilla movies, as well as the 2017 Kong: Skull Island movie, this monster mash has been on the cards ever since Warner Brothers announced that they were all going to be part of the same Monster Movie Universe, and I couldn't be happier.

However, while watching the movie one time with the sound turned off, I noticed something. Without hearing a word of dialogue from anyone, I could still follow the plot of the trailer very easily. And then I thought... does the final movie need any dialogue at all??

END_OF_DOCUMENT_TOKEN_TO_BE_REPLACED

The following is each and every line of dialogue in the trailer, and while some of it makes for fantastic Trailer Talk, absolutely none of it feels strictly necessary.

"This is our only chance."

END_OF_DOCUMENT_TOKEN_TO_BE_REPLACED

"The world needs him to stop what's coming."

"And this child... he's the only one he'll communicate with."

"I knew that they had a bond. She had nowhere to go, so I made a promise to protect her."

"And I think that in some way, Kong did the same."

There is then 30 SECONDS WITH NO DIALOGUE, and it is only AFTER Godzilla destroys aircraft carriers, tail-flicks jets out of the sky, and jumps from the water towards Kong's throat, does someone say: "It's Godzilla." Yeah, no shit.

Then Chris Classic's 'Here We Go' starts to play, which makes it sound like two boxers are about to enter the ring. Or, as YouTube describes it: 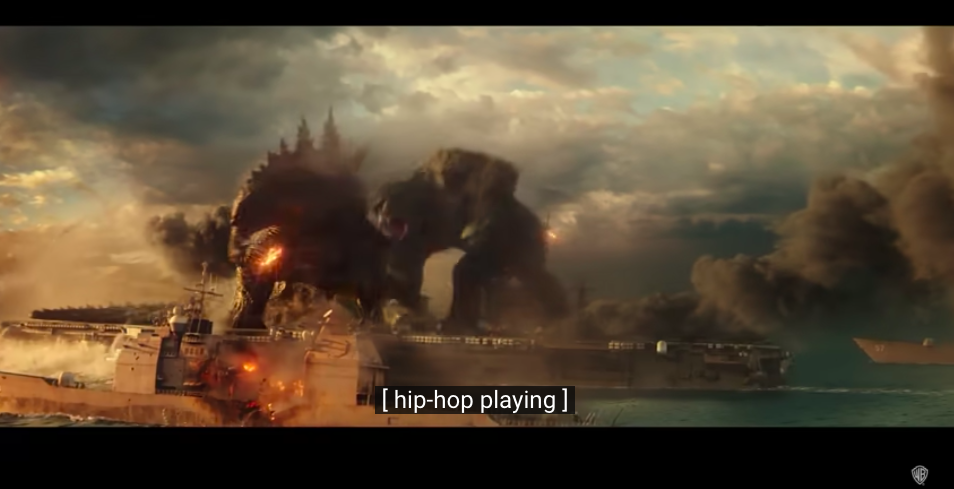 It is then ANOTHER 30 SECONDS before any more dialogue starts, and it is basically back-to-back Trailer Talk:

"These are dangerous times."

"Godzilla is out there, and he's hurting people, and we don't know why."

"There's something provoking him that we're not seeing here."

"The myths are real."

"And they're the last ones standing."

And then there is no more dialogue, unless you want to include this: 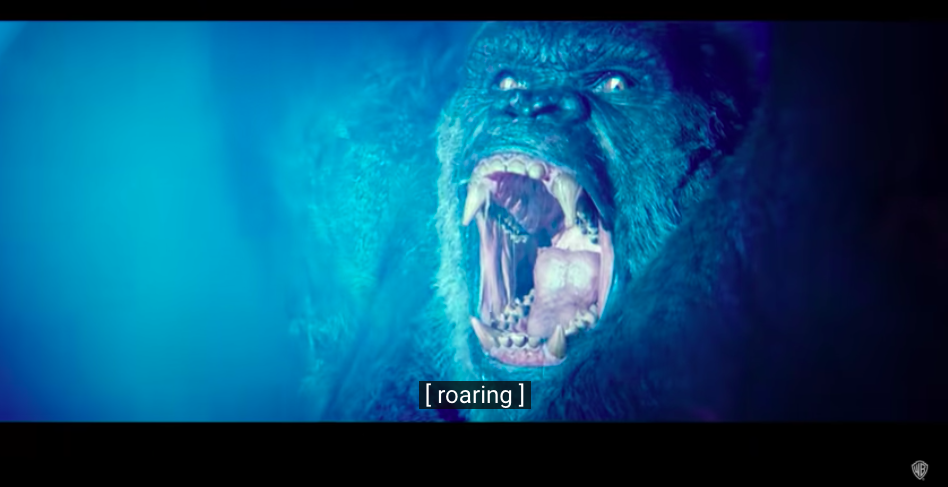 Obviously, I don't think the final movie will be dialogue-free, as the stacked cast of Millie Bobby Brown, Kyle Chandler, Alexander Skarsgård, Rebecca Hall, Brian Tyree Henry, Eiza González, Jessica Henwick, Julian Dennison, and Demián Bichir all need something to say, but we can still dream...

On top of that, two other things stood out during the trailer.

One - I really appreciate this shot, because we can begin another fantasy in our minds, one that involves Godzilla causing havoc in the world of Blade Runner or Cyberpunk 2077. Take that, the future!

Two - At just three seconds into the trailer, what is that?

If that turns out to be MechaGodzilla, I will completely lose my mind when I sit down to watch this.

Godzilla vs. Kong is set to debut in the United States on 26 March this year, and we'll have to see if cinemas are Ireland have re-opened by then before we get a confirmed release date.

All images and clips via Warner Bros. UK & Ireland

popular
Bus Éireann’s service from Dublin to London will restart this week
Gardaí unveil new Armed Support Unit vehicles to replace older models
Rockstar Games reportedly shelving remasters of two of the best games ever made
Conservative Party vice chairman resigns live on TV as Johnson administration thrown into turmoil
One in two young people likely to not own a home by the time they retire
The full list of cancelled flights in and out of Dublin Airport on Monday (so far)
WATCH: Protester interrupts Good Morning Britain with 'Bye Bye Boris' song
You may also like
21 hours ago
NOW announces large reduction to its monthly membership prices
21 hours ago
An action-packed thriller is among the movies on TV tonight
23 hours ago
Amazon Prime Video has just added 51 big movies to its library
1 day ago
REVIEW: Thor Love and Thunder is equal parts fun and blunder
1 day ago
The inspiration for a legendary meme is among the movies on TV tonight
2 days ago
James Cameron gives surprising updates on Avatar 4 and 5
Next Page