Another day, another lockdown, another night in front of the TV.

Good movie news has been in plentiful supply today with the revelations that Netflix is going to release a new movie every single week for 2021 with some of the biggest names in the world starring and directing in them. 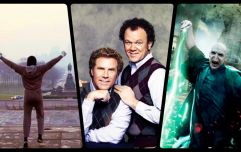 END_OF_DOCUMENT_TOKEN_TO_BE_REPLACED

But for now, here's the best movies on TV today.

JJ Abrams directs a group of movie-loving kids fighting for their lives in Smalltown USA, as a mysterious monster prowls the night-time streets.

Ender Wiggin, a brilliant young strategist, is recruited by the International Military to lead the force defending Earth from a genocidal alien race bent on annihilating humankind.

Some of the newer X-Men films are good, and some are not.

END_OF_DOCUMENT_TOKEN_TO_BE_REPLACED

One of the most memorable comedies of all time.

Spectre baddies are also introduced for the first time as we know them.