In a parallel universe, this movie might have been up for Best Picture.

Allow us to set the scene.

About a third of the way through Bohemian Rhapsody, a scene takes place in the office of EMI executive Ray Foster. The members of Queen, along with their management, have just completed recording their album A Night At The Opera, ending with 'Bohemian Rhapsody' itself.

END_OF_DOCUMENT_TOKEN_TO_BE_REPLACED

At 6-minutes long, Foster doesn't think it will work for radio.

Freddie Mercury and co. want it to be the first single from the album.

There is a back and forth over it being too experimental, with Foster saying they should go with 'I'm In Love With My Car' as the first single instead.

Foster tells the band: "This is a song that long-haired teens will rock out to in their car. No teenager is going to rock out to 'Bohemian Rhapsody'."

The reason why this line, and this scene, is so important is because Ray Foster is played by Mike Myers.

The same Mike Myers who rocks out as a long-haired teenager in Wayne's World to... yep, 'Bohemian Rhapsody'.

It is a great scene, filled with great performances, and is a very funny, smart, meta moment. And it completely kills any sense of truth that you might have felt this movie was going to portray for Freddie Mercury and his legacy. 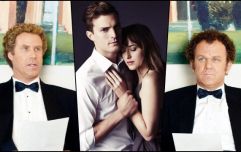 END_OF_DOCUMENT_TOKEN_TO_BE_REPLACED

This movie is one of the most difficult to completely separate the finished product from all of the background noise: Sacha Baron Cohen dropped out of the original attempt to make the movie back in 2012, when Brian May reportedly wanted a movie that didn't just end telling the story of Queen with the death of Freddy Mercury. Then, on this production, original director Bryan Singer was fired for an apparent myriad of reasons.

Dexter Fletcher (Eddie The Eagle) then took over in the director's chair (although Singer retains a sole directing credit), and all of that behind-the-scenes messiness is very much visible on the finished product.

No matter how fantastic and transformative a performance Rami Malek put in (in the right version of this movie, he'd be a Best Actor Oscar frontrunner), or how incredible the final 20-minute recreation of the Live Aid performance is, or how great the supporting cast are - Myers, Ben Hardy, Aiden Gillen, Gwilym Lee, Tom Hollander, and Joseph Mazzello all do some real heavy lifting - they can't overcome the biggest fault of the film.

Bohemian Rhapsody is too concerned with being a movie (hence that in-jokey Myers scene), not with being true to Mercury, or even to Queen as a group.

The fingerprints of May, whether real or imagined, are felt all over this project, simultaneously a sanitised version, as well as a fictionalised one. Almost the entire first half of the movie is dedicated to Mercury's love story with Mary Austin (Sing Street's Lucy Boynton, shining in an inexplicably overdeveloped role), but his relationships with eventual life partner Jim Hutton (Shameless' Aaron McCusker, a nuclear attack of charm) is basically a footnote.

END_OF_DOCUMENT_TOKEN_TO_BE_REPLACED

Additionally, Mercury's first proper gay relationship, with band PA Paul Prenter (Downton Abbey's Allen Leech, consta-wearing leather to shorthand being a homosexual) is essentially made the movie's villain because... otherwise there isn't one?

Same goes with Freddie's AIDS diagnosis, which is here used as his catalyst to do the LiveAid show as one last hurrah, when reports indicate he wasn't actually diagnosed until years later.

Freddy Mercury was one of the first out-and-proud queer performers that attained mass popularity, and his story deserved to be told truthfully, and told well. Queen's music lives on to this day, and deserves to be re-discovered by an entirely new, younger audience.