WATCH: Ivan Drago's son looks like an absolute tank in this clip from Creed 2

During the summer we shared the first trailer for Creed 2, and even then we were excited.

That clip showed Michael B. Jordan looking in incredible shape in some training scenes, as well as some insanely realistic fight scenes. 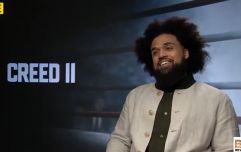 EXCLUSIVE: Creed 2 director on the secret to making the perfect Rocky montage

END_OF_DOCUMENT_TOKEN_TO_BE_REPLACED

The movie has a really interesting plot, which will see Adonis Creed stepping back into the ring, where he will have to fight a part of his own history.

He will be fighting the son of Ivan Drago, the man who killed his father in the ring. w

We still haven't forgiven you Ivan...

So you'd assume the fight is going to have a bit of bite to it...

In a video posted by Rotten Tomatoes on their Twitter page, we see Viktor Drago, played by Florian Munteanu training for a fight against Adonis Creed.

Take a look for yourself:

Adonis is going to have his hands full, Viktor Drago is an absolute monster! #CreedII pic.twitter.com/VElUPsBK54 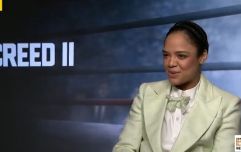 END_OF_DOCUMENT_TOKEN_TO_BE_REPLACED

We know it's just a movie, but in shape like that, we reckon he'd still be well able to beat the head off a lot of lads...

This clip just has even more excited for what is going to be an amazing movie.

The movie is going to be released in Irish cinemas on 21 November.

We're counting down the days.

The Big Reviewski || JOE · The Big Reviewski with Y: The Last Man, that Malignant ending & a secret streaming service
popular
Cash, Rolexes, cars and one Canada Goose jacket seized in major Garda raid
You could be shopping in an Aldi store with no checkouts in Ireland in the near future
Man (40s) in critical condition following serious road collision in Cork
Government announces special €1,860 payment for laid-off workers during pandemic
New special payment for workers laid off during pandemic - Who is eligible and what are they entitled to?
Men arrested trying to cross New Zealand border with boot full of KFC
QUIZ: Can you 100% this tricky Oasis quiz in just three minutes?
You may also like
4 months ago
Michael B. Jordan's Navy SEAL workout is absolutely brutal
2 years ago
The soundtrack for Creed II will give Black Panther a run for its money
2 years ago
#TRAILERCHEST: The latest trailer for Creed II shows the absolute monster he has to go up against
3 years ago
Stallone releases the poster for Creed 2 and gives us our first look at Ivan Drago Jr.
6 days ago
The best video game TV show in history is finally coming back
6 days ago
Y: The Last Man star Ben Schnetzer on his brand new show, love for Diane Lane and pandemic productions
Next Page