Well. That was an emotional rollercoaster to say the least.

Sunday night played host to a hell of a lot of good television.

We had the first episode of the new season of I'm A Celeb, Louis Theroux's brand new documentary about euthanasia, and a new part of David Attenborough's Dynasites series.

The Dynasties team documented an emperor penguin colony that has to battle to survive the cold winter on earth – and they can only do so through teamwork.

And that team are getting a lot of love since the show aired.

It was revealed that for the first time that Attenborough's crew actually intervened when it seemed certain that a group of penguins would die as a result of a "freak act of nature".

In an unprecedented move, the crew decided to act. They dug a shallow ramp in the hope that at least some of the penguins would use it to save themselves 💚#Dynasties pic.twitter.com/yRuoEGPDCk 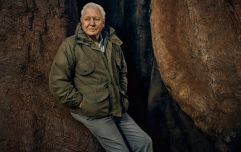 END_OF_DOCUMENT_TOKEN_TO_BE_REPLACED

According to the Sun, during a conference earlier this month producer Mike Gunton said: "We have a rule that interfering is a very dangerous thing to do. But these penguins were going to die through a freak act of nature if nothing happened.

"How would this conversation be going if you said you saw them there and did nothing? I think you have to do it."

The show also featured an incredible clip of 4,000 penguins huddling to form a frozen incubator.

Penguins huddle to form a frozen incubator of 4000 males#Dynasties pic.twitter.com/ZO7ENlcGuH


popular
The lineup for this week's Late Late Show has been revealed
QUIZ: Can you name all these European countries just from their vowels?
QUIZ: Can you guess the pixellated movie posters?
Met Éireann says there's a risk of snow for parts of Ireland this weekend
QUIZ: How many of these Recess characters can you name?
Man being treated for suspected case of coronavirus in Belfast
Star Trek: Picard mostly manages to boldly go where no Star Trek show has gone before
You may also like
1 week ago
David Attenborough says 'the moment of crisis has come' in relation to climate change
3 weeks ago
WATCH: David Attenborough tells Greta Thunberg she has "woken up the world"
1 month ago
Netflix will be releasing a brand new David Attenborough documentary film
1 month ago
Live concert of David Attenborough's Our Planet series coming to Dublin
2 months ago
Blindboy on why people feel threatened by Greta Thunberg
2 months ago
Once again, David Attenborough's Seven Worlds, One Planet left viewers astounded
Next Page