Dominic West, star of The Wire, to read out 1916 Proclamation in Ballybunion on Saturday

The actor has always proudly spoken about his Irish roots.

Dominic West is looking forward to reading the 1916 Proclamation in Ballybunion on Saturday and says his recitation is a sign of how far relations have come between Ireland and the United Kingdom in the last 100 years.

West gave an interview to Radio Kerry on Friday, which you can listen to in full here. 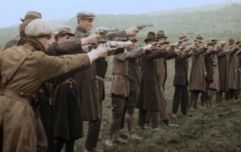 WATCH: The Irish War of Independence now has a fully colourised documentary

END_OF_DOCUMENT_TOKEN_TO_BE_REPLACED

The star of The Wire and The Affair will take part in a commemoration of the roles played by The O’Rahilly, Michael Mulvihill and Patrick Shortis in the Easter Rising.

"My mother's parents were both Irish and my father's mother was Irish. I may sound English, and I grew up in England, but like so many millions we'd consider ourselves Irish," the actor said on Friday.

"We also believe that the fractiousness that came out of the fight for independence means that, 100 years later, we're able to see our common ground."

popular
James May reportedly hospitalised after crashing into wall at 75mph filming new show
Disney+ has just added 10 big movies to its library
QUIZ: You'll need to be razor-sharp to get 100% in this General Knowledge Quiz
Netflix has just added an incredibly tense 97-minute thriller
An exciting Irish crime thriller is among the movies on TV tonight
The JOE Friday Pub Quiz: Week 307
A great underseen action thriller is among the movies on TV tonight
You may also like
3 years ago
BBC wouldn't let Rod Stewart perform a beloved Irish ballad because of its 'anti-English overtones'
4 years ago
Picture of Countess Markievicz, first woman elected to House of Commons, unveiled in Westminster
4 years ago
Google planning to buy historic 1916 landmark in Dublin
5 years ago
Glasnevin 1916 memorial wall defaced in "act of callous vandalism" on Saturday night
6 years ago
VIDEO: Canadian Ambassador to Ireland tackles protester at ceremony in Dublin to honour soldiers killed in 1916
6 years ago
PIC: Somebody has updated the iconic 'You Are Now Entering Free Derry' mural
Next Page