Any dragons flying around?

Well, not in real life because we're delighted to see that the very charitable and popular singer is continuing to enjoy his success, but in Game of Thrones, he's gonzo.

END_OF_DOCUMENT_TOKEN_TO_BE_REPLACED

Sheeran's guest appearance as a singing Lannister soldier was heavily criticised by some fans, but others didn't really mind it too much.

We're of the opinion that while the scene was ok, you were really aware that you were watching Ed Sheeran in it.

That might sound a bit stupid, but it's like for those few moments, you weren't watching Game of Thrones. It just felt a bit strange and overt.

Compare that with the more subtle cameos from Sigur Ros, Mastodon, Snow Patrol's Gary Lightbody or Will Buckley of Coldplay.

Hopefully, you know what we mean. 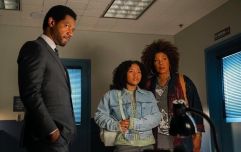 END_OF_DOCUMENT_TOKEN_TO_BE_REPLACED

Anyways, the scene was a nice reward for one of Sheeran's biggest fans, Maisie Williams (Arya Stark), but it appears that the singer won't be returning to Westeros.

In an interview with MTV, Sheeran was asked about the prospect of making another cameo in Season 8 and he pretty much said that there was no chance of that happening.

"We were all quite young, those soldiers. I doubt I'm going to survive for that long, to be honest, when there are dragons in the world," he said.

Regarding a return to the show, Sheeran ruled it out by saying: "No one wants to see me come back. I wanted to be a cameo in it, and I've done the cameo. I'm cool with it, though. I enjoyed it," he said.

Our take on these quotes is that Drogon ate him, or burned him alive.