The film is also, somehow, about The Beatles.

We're not here to judge you (to your face). 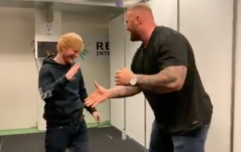 WATCH: The Mountain from Game of Thrones lifts Ed Sheeran over his head like a rag doll

END_OF_DOCUMENT_TOKEN_TO_BE_REPLACED

But even Ed Sheeran fans must find this a little... self-indulgent.

This isn't like Eminem playing a version of himself in 8 Mile.

Nope, according to Pitchfork, the film will star Himesh Patel (Eastenders) as a musician who wakes up one day to discover that he is the only person on the planet who remembers the Beatles. Sheeran (playing himself) then discovers Patel’s character and takes him on tour.

"They shot [the film] around loads of my gigs," Sheeran said of the filming process. "So it was a very intense two months. Because I would have four days of gigging and then three days of shooting a film. I was playing myself, so I don’t think I was that bad. There wasn’t much to [mess] up."

The currently-untitled movie is due for release in September 2019, and was written by Richard Curtis (About Time, Four Weddings & A Funeral), and directed by Danny Boyle (Trainspotting, 28 Days Later).

The thing is though, Boyle was lined up to direct the next James Bond movie until quite recently, when there was talk of creative differences and he left the project. Considering the Bond movie was due out in October 2019, just one month after this Sheeran Does Sheeran project... makes you think...

The Big Reviewski || JOE · TBR Spotlight: Loki - Episode Six - 'For All Time. Always.'
popular
Only Murders in the Building is a must-watch for fans of true crime podcasts
Dublin pub hit with 'about 50 or 60' fake bookings on first day of indoor service
The 50 most iconic songs of all time* have been revealed
PICS: The man with the biggest penis in the world has one unbelievable problem with it
People think they've figured out the ranking of the viewers on your Instagram Stories
QUIZ: How many of these famous erect landmarks can you recognise?
Pro Evolution Soccer has been killed off after 26 years
You may also like
5 months ago
QUIZ: Can you name the Ed Sheeran song from a single lyric?
1 year ago
Ed Sheeran is taking another break from music
1 year ago
Ed Sheeran crowned as the UK’s artist of the decade
1 year ago
"Emotional" Ed Sheeran announces he is taking an extended break from music
2 years ago
An Ed Sheeran pop-up shop is coming to Dublin this week
2 years ago
Ed Sheeran announces surprise new album
Next Page