Here at JOE HQ we’ve gone into Anchorman 2 overdrive with today’s release of the film’s latest trailer. You can check out the new footage here.

I mean, why wouldn’t you? It’s very, very funny and, more importantly, it’s got an angry Harrison Ford in it.

END_OF_DOCUMENT_TOKEN_TO_BE_REPLACED

The even better news though, is that the perfect foodstuff accompaniment for all of your Burgundy viewing pleasures has also just been invented. The delicious geniuses over at Ben & Jerry's have created a limited edition ice cream flavour to tie in with the film’s upcoming release.

And, in true Anchorman style, it’s nothing short of brilliant: 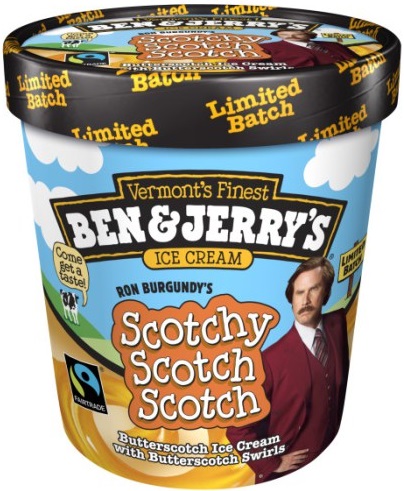 END_OF_DOCUMENT_TOKEN_TO_BE_REPLACED

Unfortunately there’s no actual scotch included in the ingredients for this tasty treat, so you’ll have to provide your own Burgundy beverage as you chow down on your "Butterscotch Ice Cream with Butterscotch Swirls."

We’re pretty sure the great man himself (and fellow ice cream lover, Brick Tamland) would definitely approve of the fantastic flavour choice:

Ben & Jerry’s have also kindly provided us with an Anchorman-inspired description of the delicious dessert:

END_OF_DOCUMENT_TOKEN_TO_BE_REPLACED

“We don't know how to put this but this flavour is kinda of a big deal.  Discovered by the Germans in 1904, they named it ‘Scotchy Scotch Scotch’.  Scholars maintain that the translation was lost hundreds of years ago.  Stay Classy, From all of us at Ben & Jerry's.”

So grab your nearest tub of ‘Scotchy Scotch Scotch’ and settle down to watch the new trailer repeatedly between now and 20 December.

Anchorman 2: The Legend Continues is released in Irish cinemas on 20 December 2013.

popular
Here's how to make €9-11 on Revolut in just a few minutes
Green Party representative calls for a temporary ban of stag and hen parties in Ireland
Pop Idol star Darius Campbell Danesh has died, aged 41
Off-duty Garda arrested in Tipperary on suspicion of drink driving
QUIZ: You won't be able to correctly guess the meaning of all these words
Dublin Bus passenger assaulted in suspected homophobic attack
Murder investigation launched following death of 75-year-old woman in Kerry
You may also like
2 days ago
FBI release findings of Rust investigation after shooting of Halyna Hutchins
4 days ago
Disney+ has just added 10 big movies to its library
5 days ago
The Sweatiest Movie Quiz Of All Time
5 days ago
The new Love Island and 8 more new movies & shows to watch this weekend
6 days ago
WATCH: House of Hammer details the alleged crimes of award-winning actor Armie Hammer
6 days ago
Prime Video has just added 25 very big movies to its library
Next Page