The Room star Greg Sestero is coming to Dublin next month

Get all of your unecessary plastic spoons and footballs out, because one of the stars from the best-worst movie of all time is rolling into Dublin in May.

That's right, Greg Sestero, who played Mark in the hilariously dire drama The Room will be coming to the Light House Cinema on Saturday, 5 May to give a Q and A for his latest film, Best F(r)iends. 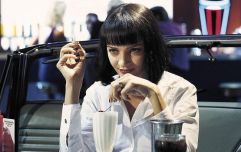 END_OF_DOCUMENT_TOKEN_TO_BE_REPLACED

Written and starring Sestero, the film also features the infamous director-actor-producer-writer of The Room Tommy Wiseau, marking the first time that Sestero and Wiseau's have appeared on-screen together since the accidental masterpiece was released back in 2003.

Based on the anecdotes of the pair's twenty year friendship, Best F(r)iends is described as "a unique two-volume cinematic saga that interweaves mystery, intrigue, and more than a few dark laughs."

Sestero will be appearing at the Light House Cinema on Saturday, 5 May for two screenings of the film, followed by a Q&A hosted by Derek O'Connor.

popular
QUIZ: You'll do well to get 100% in this General Knowledge Quiz
Body of woman in her 70s found in unexplained circumstances in Kerry
25 years ago, Sylvester Stallone delivered his best performance in a hard-hitting crime drama
QUIZ: How well do you really know Irish weather?
Disney+ has just added 10 big movies to its library
QUIZ: Can you get 10/10 in this Irish sayings quiz?
The new Garda uniform has finally hit the streets
You may also like
4 years ago
In celebration of the greatest movie of all time being released, there is a shark movie festival happening in Ireland
4 years ago
Quick! The Light House Cinema just added some more dog-friendly screenings for this weekend
4 years ago
PICS: This Dublin cinema held a dog-friendly screening of Isle Of Dogs and it is a cuteness overload
4 years ago
You can now bring your dog to the cinema - for one glorious day only
4 years ago
Dublin's famous Light House Cinema is opening a sister cinema in Galway, and they're hiring
5 years ago
Film fans will love this special Light House Cinema screening event with an Oscar-nominated Kerrywoman
Next Page