Has a three-year-old secret from Guardians Of The Galaxy finally been figured out?

Marvel love their secrets and surprises.

Lots of fans have found out neat little additions in their favourite superhero movies by freeze framing specific scenes and looking for stuff in the background.

The entire Marvel Cinematic Universe is full of crossing points, with events from one movie having direct influence on what might happen in a different character's movie, and so on.

Writer/director James Gunn, who has delivered the two Guardians Of The Galaxy movies for Marvel, has stated that there is one major Easter Egg still undiscovered in the first movie, and that nobody has guessed it correctly yet. 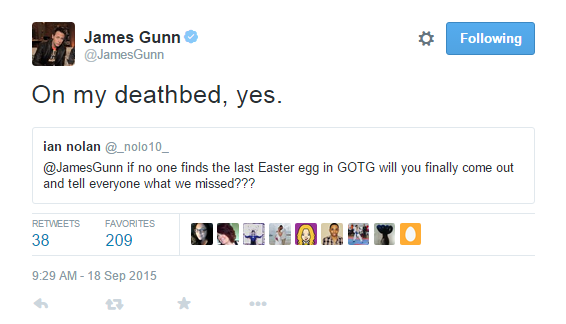 END_OF_DOCUMENT_TOKEN_TO_BE_REPLACED

There has no sign of anyone getting close to guessing it correctly, which must be absolutely MADDENING for fans of the GOTG series. 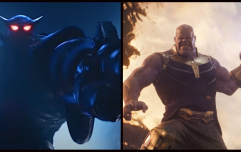 END_OF_DOCUMENT_TOKEN_TO_BE_REPLACED

Yes, one of the folks at ScreenCrush believes that they have finally figured it out.

We won't spoil the fun for you, but while it doesn't exactly alter the shape of the MCU as we know it, it does bring some very interesting connections between the Guardians Of The Galaxy and another member of the Avengers that most people wouldn't have even realised was there.

As of the time of writing, James Gunn has not confirmed or denied that this is the same Easter Egg he has been alluding to, so now we just wait and see if ScreenCrush got it right or if we need to keep looking.

popular
QUIZ: Test your knowledge with this Ultimate Friends Character Quiz
House Of The Dragon is already better than Game Of Thrones
The JOE Friday Pub Quiz: Week 313
Fine Gael Councillor slams attendees of cost of living crisis protests
Amazon Prime Video has just added 20 very big movies to its library
QUIZ: Name the country for each of these non-capital cities
Details of cash payments and Christmas bonus outlined in Sinn Féin’s alternative budget
You may also like
2 weeks ago
WATCH: Bridge is officially opened... before immediately collapsing once ribbon is cut
3 weeks ago
Man explains why some guys don't show their girlfriends on their Instagram story
1 month ago
The Ultimate "That Actor From That Thing" Quiz
7 months ago
30 years ago, Arnie's biggest prank ended with Stallone's biggest flop
8 months ago
China gives Fight Club a new ending, manages to completely change the plot of the movie
10 months ago
Who tweeted it: Simu Liu or Rahul Kohli?
Next Page