There was more love for this character than we'd realised...

Several months later, and Avengers: Infinity War is still the talk of the (movie lovers) town.

As the film is closing in on $2 billion at the worldwide box office, all eyes are now looking forward to the still-untitled sequel due to arrive in April 2019. 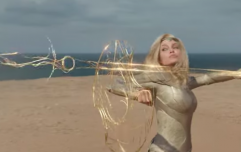 WATCH: The final trailer for Eternals reveals the huge ramifications from Avengers Endgame

END_OF_DOCUMENT_TOKEN_TO_BE_REPLACED

However, there are still some elements of Infinity War that fans are having a hard time getting over, like the fact that Thanos isn't even the most disliked character in the movie.

More than that though, is the fact that Hawkeye was nowhere to be seen, and some fans were supremely unhappy about that.

So much so that the directors of the movie actually received death threats.

On the press tour for his new comedy Tag - which looks great, by the way - Jeremy Renner revealed to USA Today that the directors had been on the receiving end of some truly upsetting messages:

"I think [the directors] the Russo brothers got way too many death threats. I’m like, 'Wow, dude, that’s intense. I’m sorry!'"

It is nice to be wanted, we guess... Also, we can probably safely assume that Thanos' finger snap didn't take Hawkeye out along with 50% of the universe's population, as Renner talks very vaguely about the upcoming sequel:

"Everybody’s got to bite their tongue. But if you like Infinity War, there’s some stuff to come. What I do know is it’s going to be awesome."

JOE was lucky enough to chat to the directors a few weeks back, and of course we had to ask about the fate of Hawkeye:

popular
Schools and third level institutions to remain closed in counties affected by orange or red weather warnings
These are the most generous counties in Ireland, according to GoFundMe
Schools affected by Storm Barra expected to reopen tomorrow, says Minister
Dart+ West reaches "crucial milestone" on road to transforming Dublin rail network
Woman in her 90s dies following road crash in Clare
Thousands of people missing booster vaccine appointments
A fun action flick with Nicolas Cage is among the movies on TV tonight
You may also like
1 year ago
QUIZ: Match the Marvel Cinematic Universe quote to the character who said it
1 year ago
Controversy surrounds new Avengers video game
2 years ago
WATCH: It's out with Iron Man and in with Doctor Dolittle for Robert Downey Jr.
2 years ago
Martin Scorsese doubles down on claim that Marvel movies are "not cinema"
2 years ago
Disney unveil plans for Avengers theme park
2 years ago
WATCH: Opening 20 minutes of new Avengers game reveals major plot point
Next Page