James Gunn's brother claims that Disney will still be using his script for Guardians of the Galaxy: Volume 3

This is an interesting development.

Back in August James Gunn was fired as director of the upcoming Guardians of the Galaxy: Volume 3 after old, offensive tweets were unearthed.

The tweets were posted in jest a number of years ago, but were described as "indefensible" by Disney. 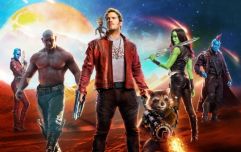 Over a year before it arrives in cinemas, Guardians Of The Galaxy Vol. 3 has already broken a world record

END_OF_DOCUMENT_TOKEN_TO_BE_REPLACED

Since then, rumours have gone back and forth as to whether or not Gunn would be rehired as director.

Disney have remained adamant that he will not have any part in the third movie in the Guardians series, but a recent interview with Gunn's brother has suggested that the new director will still use his original script.

According to comicbook.com, Gunn's brother, Sean, claims that the situation is very much still up in the air: "I don't really know yet what's going on with Guardians 3," Gunn said. "I know that Disney still wants to make the movie.

"I know that they have every intention of using the script that my brother wrote. Obviously, that was a very unfortunate situation for everybody, most of all him, but I am also somebody who had been preparing to spend half a year making that movie and now that's up in the air."

Sean Gunn played Kraglin in the Guardian movies, and also provides the movements for Rocket.

No release date is confirmed for the movie, largely due to the uncertainty of the situation, but it is expected to be released in 2019.

popular
The JOE Friday Pub Quiz: Week 308
Fine Gael announces special screenings of Michael Collins movie in 19 cinemas across Ireland
Controversial influencer Andrew Tate banned from Instagram and Facebook
Infant dies after being hit by jeep in Roscommon
Two Irish people arrested in "smuggling event" near Miami
Netflix has just added 23 very big movies to its library
Pilots fly over destination airport at 37,000 feet because they were both sleeping
You may also like
5 months ago
2021's most-overlooked game is now available "for free" for Xbox players
1 year ago
Christmas comes early for gamers as FIVE big trailers are dropped this week
3 years ago
The amount of money Robert Downey Jr. made for Avengers: Infinity War is insane
3 years ago
Disney reportedly reinstate James Gunn as Guardians of the Galaxy 3 director
3 years ago
#TRAILERCHEST: James Gunn's new horror movie brings an evil Superman to the world
3 years ago
One of the stars of Guardians Of The Galaxy has offered to follow James Gunn over to Suicide Squad 2
Next Page