JK Rowling has taken to her website to release a statement on her decision, and the directors' decision, to keep Johnny Depp as part of the cast of the next Fantastic Beasts and Where to Find Them movie.

Depp was cast as Gellert Grindelwald before allegations surrounding his relationship Amber Heard came to light. Once they became known in the media, lots of people began to wonder whether or not Rowling would replace the actor.

END_OF_DOCUMENT_TOKEN_TO_BE_REPLACED

Now, almost a year since the news was revealed that he would be joining the franchise, Rowling has had her say on the matter.

When Johnny Depp was cast as Grindelwald, I thought he’d be wonderful in the role. However, around the time of filming his cameo in the first movie, stories had appeared in the press that deeply concerned me and everyone most closely involved in the franchise.

Harry Potter fans had legitimate questions and concerns about our choice to continue with Johnny Depp in the role. As David Yates, long-time Potter director, has already said, we naturally considered the possibility of recasting. I understand why some have been confused and angry about why that didn’t happen. 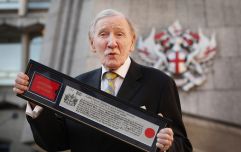 END_OF_DOCUMENT_TOKEN_TO_BE_REPLACED

The huge, mutually supportive community that has grown up around Harry Potter is one of the greatest joys of my life. For me personally, the inability to speak openly to fans about this issue has been difficult, frustrating and at times painful. However, the agreements that have been put in place to protect the privacy of two people, both of whom have expressed a desire to get on with their lives, must be respected. Based on our understanding of the circumstances, the filmmakers and I are not only comfortable sticking with our original casting, but genuinely happy to have Johnny playing a major character in the movies.

I’ve loved writing the first two screenplays and I can’t wait for fans to see ‘The Crimes of Grindelwald’. I accept that there will be those who are not satisfied with our choice of actor in the title role. However, conscience isn’t governable by committee. Within the fictional world and outside it, we all have to do what we believe to be the right thing.

popular
Amazon Prime Video has just added 38 very big movies to its library
The start of the superhero takeover of Hollywood is among the movies on TV tonight
Ashton Kutcher opens up about rare disease that left him unable to see or walk
The Pogues’ Shane MacGowan rushed to hospital
Lady Gaga's dognapper sentenced to 21 years in jail
Matthew Perry can't rewatch any of Friends for heartbreaking reason
Mia Khalifa claims seaside town is better than Miami
You may also like
4 days ago
The JOE Friday Pub Quiz: Week 323
1 month ago
One of the most expensive Xmas films of all time drops in a couple of weeks
1 month ago
The JOE Friday Pub Quiz: Week 318
1 month ago
REVIEW: Barbarian is one of the best scary movies of the last few years
1 month ago
One of the most romantic movies ever made has just been added to Netflix
1 month ago
New horror film so scary people are reportedly fainting and vomiting in the cinema
Next Page