We can't wait for this.

He's absolutely hilarious, a genuinely brilliant actor, and he loves Ireland so much that he has built an entire Irish pub in his house in the US.

END_OF_DOCUMENT_TOKEN_TO_BE_REPLACED

So throw him in a Netflix series with Kildare's own Aisling Bea, and you better believe that we are all in.

In his first leading television role, Rudd plays Miles, a man who is struggling with his life in Living With Yourself.

When he undergoes a novel spa treatment that promises to make him a better person, he finds he’s been replaced by a new and improved version of himself. 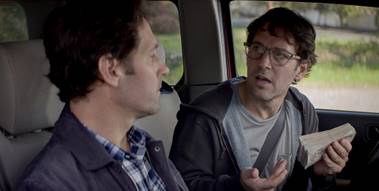 END_OF_DOCUMENT_TOKEN_TO_BE_REPLACED

As he deals with the unintended consequences of his actions, Miles finds he must fight for his wife (Bea), his career, and his very identity.

Told from a number of different perspectives, the eight-episode series was created and written by Emmy Award winner Timothy Greenberg (The Daily Show with Jon Stewart), and directed by Jonathan Dayton and Valerie Faris (The Battle of the Sexes, Little Miss Sunshine).

We can see this going down a hit, and we can't wait to binge-watch it in a matter of days.

Living With Yourself launches globally Friday, 18 October on Netflix.

popular
2022 looks like it will finally be Hollywood’s big coming out party
President Michael D. Higgins leads the Late Late line-up this week
QUIZ: Can you name all the US States that contain 8 letters?
Ryanair recruiting for over 100 positions at Dublin Airport
The spiritual successor to Roger Rabbit and 7 more movies and shows to watch this weekend
JOE Gaming Weekly - Ever wanted to see Batman fight Arya Stark?
You may also like
1 week ago
Netflix has just added 11 big movies to its library
1 week ago
New Netflix documentary about a nuclear accident scores 100% on Rotten Tomatoes
1 week ago
Netflix's new documentary Our Father is a properly nausea-inducing nightmare
2 weeks ago
The return of Mike Myers and 6 more movies and shows to watch this weekend
2 weeks ago
Netflix has just added 30 very big movies to its library
2 weeks ago
Dave Chappelle attacked on stage during Netflix stand-up show in LA
Next Page