Love Actually is a fantastic movie because we are all scum, actually.

To paraphrase the great Jane Austen, "It is a truth universally acknowledged, that a movie in possession of a good following, must be in want of a severe, eventual backlash."

In the last couple of years, the internet has come for Love Actually, the 2003 Richard Curtis classic that stands as arguably the best-loved modern Christmas movie (on ITV tonight at 9pm), and one of the world's most popular rom-coms in general. 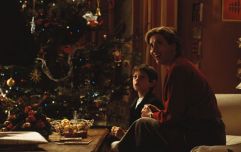 END_OF_DOCUMENT_TOKEN_TO_BE_REPLACED

Sometimes, when the tide turns against something simply because it has become too popular, the criticisms against it ring hipsterly hollow, but this is not the case for Love Actually. Almost every criticism I have ever heard about Love Actually has been pretty much dead-on.

If you're interested in what any of those criticisms may be, check out my colleague Dave Hanratty's account of why Love Actually is terrible.

Where I differ, and where I believe most of us differ, is in the belief that it is the movie's amplification of all the disgusting flaws inherent to the human condition that Love Actually is a uniquely excellent Christmas movie.

What is Love Actually about?

Broken into overlapping vignettes, it is about bosses who fancy and sexually pursue their employees, slimy lecherous husbands, a dirtbag called Karl who tries to convince Laura Linney's character to have sex with him rather than helping her schizophrenic brother. There is no depth to which Love Actually will not sink - and that is what makes it the ultimate Christmas movie of all time.

Perhaps the most adored vignette in the movie features Mark (Andrew Lincoln) and Juliet (Keira Knightly). It's the one where the guy is in love with his best mate's wife, spends the whole wedding filming her, tells her he loves her on the doorstep using clandestine cue cards, and then allows her (HIS BEST FRIEND'S WIFE) to kiss him before going back to the couch with her husband and act as though nothing ever happened. 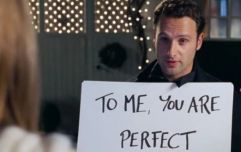 Love Actually is returning to some Irish cinemas this Christmas

END_OF_DOCUMENT_TOKEN_TO_BE_REPLACED

After this borderline unforgivable act of betrayal masquerading as feel-good wish-fulfilment for unrequited lovers, Mark steals away into the night telling himself "Enough. Enough now." But he's going to spend the rest of his life with his best friend (Chiwetel Ejiofor) and his wife at functions, parties, the birth of their first baby perhaps, and he'll be thinking "I've kissed your wife. I kissed your wife because I fancy her, and she fancies me, and you know what? Maybe we'll do it again. 'Cos that's just how life goes, mate."

There is Mia, the unscrupulous office worker who seduces her boss Harry (played by the late, great Alan Rickman) - a man who shamelessly betrays his Karen (Emma Thompson), who finds out by learning that a beautiful necklace she'd thought was a gift for her was actually for his mistress.

The couple, who have two young children together, are torn apart by the act - an act so gutting and brutal that it allows Emma Thompson to break the record for emotional-resonance-per-screentime.

Her delivery of the line "You've made the life I lead foolish too," immediately transports the viewer into a sunken place where love no longer exists and everyone you once trusted has betrayed you. The fact that we feel so connected to Emma Thompson and her pain after spending so little time with her is a resounding testament to both her acting calibre and Richard Curtis' writing.

The stomach-dropping detail in the scene where Thompson reveals she's found out about the affair is perfect, down to the woman who interrupts a potentially-marriage shattering conversation between Harry and Karen simply to wish Karen goodnight as they leave the primary school panto. 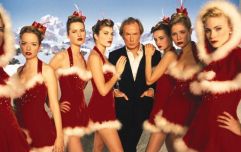 END_OF_DOCUMENT_TOKEN_TO_BE_REPLACED

But Love Actually is no mere rom-com, it is also a diplomatic thriller. One of the more iconic scenes features Prime Minister David (Hugh Grant) essentially tearing up the UK's special relationship with the US because of the sexual improprieties of the US President — a scene that once looked utterly ludicrous that since November 2016 has actually become weirdly aspirational.

A testament to the prescience of the movie, no doubt.

Love Actually is a movie about love, a concept summed up by the film's best protagonist, the 10-year-old Sam, when he asks "Worse than the total agony of being in love?" leaving his stepdad Liam Neeson in stunned silence as he takes a beat and concedes "No, you're right. Total agony."

Of course, the backdrop of this nihilistic parade of self-defeat is genuinely good comedy - mostly supplied by Bill Nighy's faded rockstar character Billy Mack, whose own very-public cynicism about the very concept Christmas catapults him to number one on the charts. His success brings him back into a world of fame that he thought he'd lost, and yet, once it sends a limousine for him - he tells fame squarely to fuck off, so he can spend time with his manager whom he loves. Because fuck everything, that's why.

And that's how life goes. We don't want what we think we want. When we get it, it destroys what we already had. We give the people we love the power to make our day and ruin our lives in equal measure.

Love Actually captures the entire ferris wheel of human chaos, and that is why we love it.


Here's your SPOILER-packed reaction to that final episode of Loki


The Big Reviewski || JOE · TBR Spotlight: Loki - Episode Six - 'For All Time. Always.'
popular
Met Éireann issues weather warning for three counties ahead of arrival of Storm Evert
Gardaí investigating assault allegations after incident in Temple Bar
Dublin cinema named best cinema in all of UK and Ireland
It’s official, Irish people have one of the best chances of surviving an apocalypse
Michael D Higgins raises concern over having to consider high volumes of legislation in short time frames
Two of 2021's biggest movies both arrive in Irish cinemas this weekend
One of the best Westerns ever is among the movies on TV tonight
You may also like
1 year ago
QUIZ: Which Love Actually character are you?
2 years ago
A Love Actually Live Concert Tour is coming to Dublin just in time for Christmas
2 years ago
The Love Actually Debate (Part 1): Love Actually is a pretty terrible film, actually
4 years ago
WATCH: The SU campaign video is 117 times better than a certain, sappy Love Actually scene
6 days ago
One of the best thrillers of the last ten years is among the movies on TV tonight
6 days ago
Two great new airplane-set thrillers to enjoy at home this weekend
Next Page