The Matt Hancock scorpion combo we never thought we'd see coming. Medics had to rush to the former Health Secretary after a nasty sting.

Medics hurried into camp when Matt Hancock yelped in pain after he was stung by a scorpion. The creature attacked the MP shortly before breakfast today and nipped him unexpectedly leaving him yelping in pain.

A show source said: "Matt didn't see the scorpion until it was too late and it bit his finger. He felt a lot of pain and made a yelping noise, but thankfully for him there was no lasting damage.

"Medics checked him over and gave him a clean bill of health but the whole camp is now watching out for them.

"Matt was saying afterwards it felt twice as painful as a bee sting."

Scorpions are not happy with Matt Hancock. (Picture: ITV) 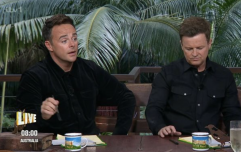 END_OF_DOCUMENT_TOKEN_TO_BE_REPLACED

While Australian scorpions can give you a nasty sting if you step on one or take it by surprise, their venom is not deadly.

Associate Professor Bryan Fry, from the University of Queensland's School of Biological Sciences, told ABC news: "Typically, the sting is minor localised pain and a tiny bit of swelling — usually quite trivial effects.

"As far as the pain sensation, the sting would normally be similar to a bee and dramatically less than that of the bullet ants that we have in Australia."

Some fans may have heard Babatúndé Aléshé make reference to the incident on air at the very end of Saturday night's show after it was revealed Matt would be doing the next Trial.

popular
The Last Of Us Episode Five will premiere days earlier in Ireland and UK
Amazon Prime Video has just added 21 big movies to its library
Shock as blues singer beats Adele, Beyonce and Taylor Swift to win Song of the Year Grammy
One of the best crime thrillers ever is among the movies on TV tonight
5 years ago, Hollywood took a massive gamble on a huge sequel... and lost big time
Ben Affleck's bored expression at the Grammys becomes a meme
QUIZ: JOE's Big News Of The Day Quiz #41
You may also like
2 months ago
I’m A Celeb hit with Covid outbreak just days before the show's finale
2 months ago
Matt Hancock 'kills vibe' on I'm A Celeb with "harrowing" teenage memory
2 months ago
England star Jill Scott discusses ‘sad’ truth about homosexuality in men’s football
2 months ago
Jonathan Ross refuses to interview "horrible human being" Matt Hancock
2 months ago
I'm A Celeb fans 'worked out' first star to be evicted after growing tensions
2 months ago
I'm A Celeb fans 'work out' first star to be evicted after growing tensions
Next Page