Nike always pull it out of the bag when it comes to big adverts.

When it comes to televised adverts, nobody really does it like Nike.

Remember the 'Mama loves Mambo' ads from back in the day, where Ronaldo, Figo and Roberto Carlos would be booting a ball around a massive stadium, alongside a whole host of other deadly footballers. 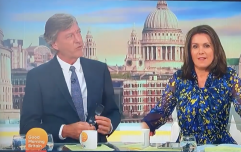 END_OF_DOCUMENT_TOKEN_TO_BE_REPLACED

Or more recently, the simply stunning Colin Kaepernick advert that relayed the message: "Believe in something. Even if it means sacrificing everything." Goosebumps, every time.

And unsurprisingly, they have added another top class ad to the list, and this one was directed by Irish woman Aoife McArdle.

Take a look here, and prepare to feel inspired:

The theme of the ad is dreams in women's sport, and the message being portrayed is that "Having a dream won't change the world. Sharing one will."

The motivational ad is beautifully directed by McCardle, and is getting a seriously positive reception online.

Now if you'll excuse us, we're now pumped enough to run a marathon.

The Big Reviewski || JOE · TBR Spotlight: Loki - Episode Two - 'The Variant'
popular
Dominic Cummings reveals "texts from Boris" calling Matt Hancock "f**king hopeless"
Public warning issued as large male boar is on the loose in Kerry
Warning issued over nationwide 087 phone scam where callers pretend to be Gardaí
Piers Morgan hits out at Ikea as it becomes latest brand to pull advertising on GB News
Richard Madeley goes full Partridge with Hitler Youth reference on Good Morning Britain
The 50 most iconic songs of all time* have been revealed
People think they've figured out the ranking of the viewers on your Instagram Stories
You may also like
4 months ago
Nike release first pair of hands-free runners
9 months ago
QUIZ: Do you know the names of these classic trainers?
1 year ago
Nike has created a pair of shoes specifically for nurses, doctors and other health workers
2 years ago
The US sports shop that boycotted Nike after its famous Colin Kaepernick advert has shut down
2 years ago
Nike unveil new self-lacing shoes that are operated via smartphone
2 years ago
Nike's online sales soar following the Colin Kaepernick campaign
Next Page