EXCLUSIVE: The moment O'Shea Jackson Jnr discovers what his (and Ice Cube's) name means in Irish

"I don't know where my name came from. I think out of a hat."

We're pretty sure O'Shea Jackson Jnr got his name from O'Shea Jackson Snr, aka Ice Cube, but he had no idea that O'Shea is actually an Irish surname, and when we told him what it meant, well... let us just say he was overjoyed.

Aside from that, we actually travelled to Manhattan to chat to Jackson Jnr. and his Den Of Thieves co-star Pablo Schreiber to talk about their new action thriller, in which they co-star with 50 Cent and Gerard Butler (who we also interviewed, and you can check those chats out right here). 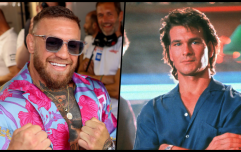 END_OF_DOCUMENT_TOKEN_TO_BE_REPLACED

Schreiber plays an angry leprachaun in the hit TV series American Gods, and he asked what we thought of his accent, but we had to know who he based his character on. Once he told us though, it became all too obvious.

We also chatted about who was the best shot, and Jackson Jnr thinks that the only person in the cast who may or may not have actually shot someone in real life should be considered the best shot... cough cough...

Their next big projects - Skyscraper and Godzilla 2, respectively - and they gave us little snippets on what to expect from those two upcoming blockbusters.

Check out the full interview below:

In case you haven't seen the trailer yet, check it out below.

popular
Budget 2023: Cigarettes going up, energy credits announced, child and social welfare increases confirmed
Two new 24-hour bus services are coming to Dublin
An action horror classic is among the movies on TV tonight
CONFIRMED: Renters to benefit from €500 tax credit as part of Budget 2023
An underseen disaster film is among the movies on TV tonight
Female child and woman in critical condition after incident in Clare
Jeffrey Dahmer’s dad thinks he knows what’s to blame for son becoming a serial killer
You may also like
1 year ago
WATCH: Conor McGregor and Machine Gun Kelly face off at MTV VMAs
1 year ago
Jake Paul calls out Conor McGregor in nasty video
2 years ago
Conor McGregor responds to Paschal Donohoe’s calls to encourage social distancing amongst Irish public
3 years ago
"I was in the wrong" - Conor McGregor apologises over incident in Dublin pub
3 years ago
Charges dropped in Conor McGregor phone-smashing case
3 years ago
WATCH: New footage released of Conor McGregor allegedly smashing fan's phone in Miami
Next Page