The two-episode sketch dubbed "Daryl" was a parody of the TV series Dexter, appearing as part of Channel 101, a short film festival which Harmon helped found. 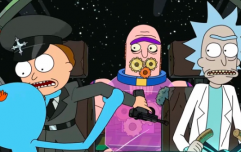 END_OF_DOCUMENT_TOKEN_TO_BE_REPLACED

Harmon apologised after a video emerged of the graphic sketch in which he plays a therapist who repeatedly molests babies.

The Guardian reports, the video was re-shared by 4Chan and far-right subreddit The_Donald, as an act of protest against Harmon’s recent criticism of President Donald Trump.

Vulture reported in 2012 that the video was removed without an explanation.

"Unfortunately," they wrote, "Daryl has been taken offline for unknown reasons. I’m going to assume that it was a move by Harmon to keep unsuspecting NBC execs who hold Community’s fate in their hands from seeing the second episode, which may or may not have contained man-on-cat rape."

In an apology issued on Tuesday, Harmon wrote: "In 2009, I made a ‘pilot’ which strove to parody the series Dexter and only succeeded in offending. I quickly realized the content was way too distasteful and took the video down immediately. Nobody should ever have to see what you saw and for that, I sincerely apologise.”

Adult Swim, who broadcast Rick and Morty, also released a statement saying that Harmon had realised his mistake.

"The offensive content of Dan’s 2009 video that recently surfaced demonstrates poor judgement and does not reflect the type of content we seek out. Dan recognized his mistake at the time and has apologised. He understands there is no place for this type of content here at Adult Swim."

House of Rugby Ireland · Quinn Roux on finding a home in Ireland and Mike McCarthy brings the absolute HEAT!
popular
RTÉ Prime Time footage shows tanned Irish holidaymakers returning from Lanzarote
Holly Willoughby criticises influencer for travelling to Dubai during pandemic
QUIZ: Can you name all of these countries just from one of their cities?
Teenage boy stabbed to death in Dublin
New Zealand set to close its borders for the entirety of 2021
Roz Purcell might want to delete this old tweet about Donald Trump...
QUIZ: Do you know the collective name for these groups of animals?
You may also like
1 year ago
Some beloved characters return in the first full trailer for Season 4 of Rick and Morty
1 year ago
Mike Mendel, long-time producer on The Simpsons, dies at the age of 54
1 year ago
QUIZ: Name the Rick & Morty character (Part 2)
1 year ago
QUIZ: Name the Rick & Morty character (that isn't Rick or Morty)
1 year ago
WATCH: Here's your very first look at Season 4 of Rick and Morty
1 year ago
Rick and Morty creators weigh in on the ending of Game of Thrones
Next Page